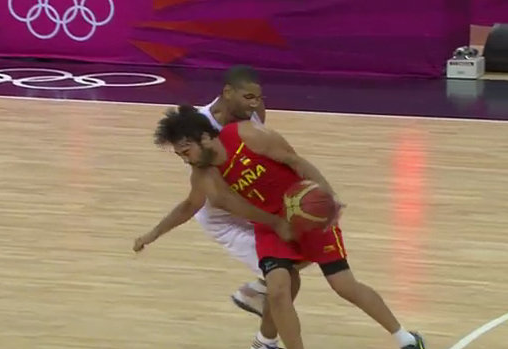 David Stern has said he wants to remove the constant flopping in NBA games. Looks like the Olympics may be able to provide him with some inspiration.

I asked Nicolas Batum why he hit Juan-Carlos Navarro in the groin. "I wanted to give him a good reason to flop," Batum said.
— Adrian Wojnarowski (@WojYahooNBA) August 8, 2012

Simple solution: You flop, you get hit in the balls. Eventually people will stop flopping. Actually I think hitting another guy in the balls is an awful thing. Punching them in the face for flopping I could get behind more.

Regarding the United States and Olympic basketball, we haven't been posting the highlights, because they're nowhere to be found. You can thank NBC for that. Anyone that dares post Olympic highlights (even from a couple days earlier) will have them yanked down quicker than you can say YouTube. The U.S. men have though advanced to the Semifinals and will be playing Argentina on Friday. If they win on Friday they'll advance to play for the gold (vs either Spain or Russia). If they lose, they'll play for the bronze (I think that's how it works at least).