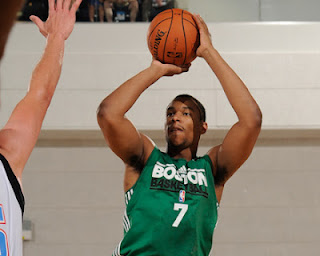 
As a rookie on a veteran squad, Sullinger is ready to embrace his place among his teammates and contribute wherever he can. A dedicated rebounder (he averaged 10.2 boards per game last season), Sullinger is looking forward to crashing the boards and helping the team with second-chance points.

The Celtics are looking forward to him doing that as well. They finished last in the league in rebounding last season.

“I’ve got to find other opportunities to score,” said Sullinger. “Like I tell everybody, rebounding is one of my strong suits of basketball. I’ve got to get ready for rebounding. Hopefully you don’t miss a lot, but if you do, hopefully I’m there to clean it up.”

That would certainly help. I don't think the Celtics have had a good rebounding season since 2008. Though can Sullinger really make a Kevin Love type of impact on the Celtics rebounding numbers? Likely not.

Still, it's good to know he is willing to set aside his own gain for the good of the team. Camerato's article is a good read and gives you a sense of the type of player Sullinger is.

He says he knows that with the stars that he will be playing with come this fall, he isn't going to be able to put up as many shots as he did in the Summer League. It's good to know that he accepts that.

If he can put aside a desire to get his name to stand out on the boxscore, and do the little things, he's going to make one Doc Rivers very happy.

While a lot of Celtics fan were hoping that the Celtics would draft someone like Austin Rivers or even Royce White, you can't help but be happy that Sullinger is on this team. He seems to understand what it means to be a Celtic and the team's legacy.

“I’m really looking forward to seeing the colorful green-and-white banners and all the retired jerseys,” he said. “Every home game that we play, I can always look up there and know that every last person that won a championship here, every last person that got their number retired here, gave it their all, and it’s the best franchise in the history of franchises. It’s kind of like a reminder of banner 18 needs to come soon.”

Sullinger is willing to accept whatever role he is given on his new team to help make that happen.