Wojnarowski: Doc Rivers should be Olympic coach in 2016 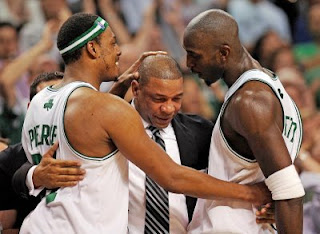 
USA Basketball will be searching for a national team coach in 2016, and however the structure of Olympic basketball changes, Rivers is an ideal candidate.

San Antonio Spurs coach Gregg Popovich deserves the foremost consideration, but that will never happen with Jerry Colangelo running USA Basketball and Mike Krzyzewski staying on in some kind of emeritus role. It's a shame, because Popovich has a peerless NBA and international coaching resumé. If a mutual distaste with Colangelo won't allow Popovich the opportunity, Rivers deserves close examination.

He's the best coach for the traditional Olympic format of NBA stars, or the proposed under-23 change that could include his son, Austin Rivers. His son, the 10th overall pick of the New Orleans Hornets last month, is part of a late-teen generation of players the Celtics coach has watched grow and develop with Austin. "To represent your country is the absolute best honor," Rivers said, "and if you ever get the opportunity, it would be hard to turn down."

This is another great read by Wojnarowski. I have to agree with him that Doc Rivers might be one of the best choices to coach the Olympic team when Coach K steps down in 2016. Obviously, a lot can change in four years, including the public perception of Rivers as one of the top coaches in the NBA.

Rivers has shown a great ability to control the egos and personalities of many colorful characters on the Celtics, and he's won doing it. He's always had the respect of not only his players but those around the league. A recent SI poll had Rivers ranked as the number one coach that players wanted to play for. This is all a compelling argument to have him coach the nation's best basketball players.

Also, maybe Rivers being the coach would finally be what it takes to get Rondo to be on this team. What do you think?