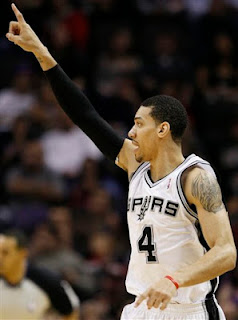 
An emerging player on the Celtics’ radar could be San Antonio restricted free agent Danny Green, who had a solid playoff stretch with the Spurs and is one of the league’s most improved players. Green started most of the postseason games for San Antonio, and because he is a second-round pick under the Arenas rule, the Spurs can match any offer to him. The Celtics will be seeking an athletic swingman who can play defense and has long-range shooting skills

Green averaged 9.1 points and 1.6 treys per game this season, and shot 43.6 percent from beyond the arc. He was a key part of that Spurs team that probably still would've been the favorite to win the championship had they gotten past OKC. However, Green's disappearance in that series really hurt San Antonio. He played only four minutes scoring zero points in each of the last two games.