Duncan and Garnett to team up? / Pietrus wants to come back 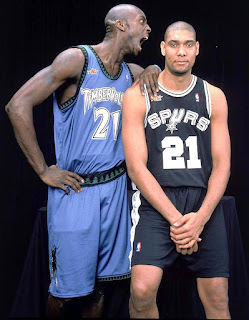 
The Spurs will consider everything and everyone this summer when free agency begins. But one option tossed out this weekend by one in the Spurs organization is not just another name.

This is just a shade beyond speculation. I really doubt this would happen. Personally, I think Kevin Garnett will either retire or stay with Boston. If not, then I don't think Tim Duncan and him could set aside their differences and play together in Texas.

In case you missed the Sports Illustrated article from a couple weeks ago, Tim Duncan hates Kevin Garnett.

KG is going to generate a lot of interest in free agency though after his resurgence this year was put on a national stage in the playoffs.

After the jump- Mickael Pietrus wants to stay in Boston too 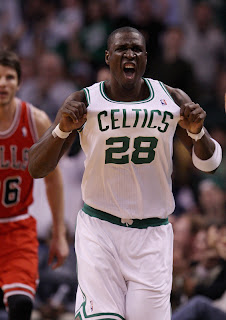 
Asked about next season, Pietrus, an unrestricted free agent, replied, “Hopefully, everybody will be back. Next year, we look forward to work even harder and try to get that 18th [NBA championship]. My goal is to win a championship. I’m only 30. I want it to happen with the Boston Celtics.

“I’m going to fight for whoever I play for next year. I’m going to work hard this summertime. Every day [with the Celtics] is a part of history.’’

Mickael Pietrus was great through most of the regular season, however he was never the same since suffering a concussion against Philadelphia in March. While he did return from that scary injury, he was also battling knee issues. He was extremely inconsistent in the playoffs.

Still Pietrus was a good defender and played with the kind of passion and effort Boston fans love so much. He was also always a good post-game interview.