What the Hell Happened to...Jerry Sichting? 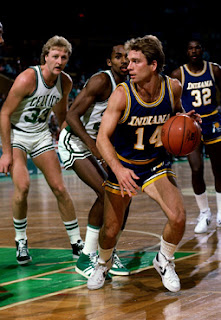 Jerry Sichting (pronounced SEE-sting) played his high school basketball at Martinsville under Sam Alford (future Hoosier great Steve Alford's dad.  In fact Steve was so obsessed with Jerry growing up, he picked his #12 to wear.  In fact Steve used to copy every move of Jerry that one time Jerry locked Steve in the dressing room.  Not surprisingly Sam, wasn't amused).

After an illustrious high school career (which included being recruited for football by Notre Dame), Jerry wanted to play his high school ball at Indiana under coach Bob Knight.  However Knight wasn't particularly high on Jerry and suggested he head to Louisville.  To spite Knight, Jerry decided to attend Purdue University, a major rival of Indiana.

[Tangent time:  In the 1979 NIT Finals (back when the NIT was still a big tournament) Indiana edged Purdue 53-52 on a shot from Butch Carter (older brother of Chris Carter, he of NFL Fame).  Jerry had a last-second shot from the corner to win it, but it rimmed out.  Purdue tied for the Big 10 title that year with Iowa and Michigan State but since only two teams were allowed to make the NCAAs back then, Purdue lost the tiebreaker and went to the NIT instead.  Which leads to this thought: Michigan State wasabouthisclose to not even going to the NCAAs that year.  Of course that was the year they won it all and beat Larry Bird and Indiana State in the title game.  Imagine that happens, and then say, Larry wins an NCAA title?  Who knows if that changes anything that transpires during his NBA career.  Crazy to think of]

Jerry was originally drafted by the Warriors in the 4th round of the 1979 draft, 82nd overall.  He stayed with the team through training camp only to be cut as a victim of a number's game.  He'd briefly try the CBA in Maine and then returned to Indiana to work in a sporting goods store.  The following season the Pacers conducted a tryout camp and anyone with any aspirations of playing in the NBA was invited to attend.  Jerry went and though incredibly out of shape, was good enough to get invited to the Pacers' summer camp in LA.  He'd eventually make the team that year as the final cut over Kenny Natt. 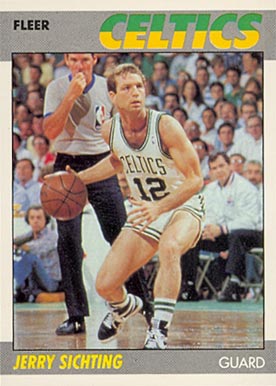 By his 3rd year in Indiana, he began to receive some actual playing time.  In the 1984 season he played in 80 games starting them all.  In 1985 he played in 70 games starting 25.  But the Pacers were godawful, Clippers-east, losing  game after game and Jerry wanted out of there asap and was about to become a free agent.  He was casual friends with Celtic' assistant Chris Ford, and figured he'd reach out to him.  Jerry was informed that the interest was mutual.  Jerry was ecstatic when the deal finally went through.

Sichting was pesky defensively and very fundamentally sound.  He rarely turned the ball over, could definitely knock down the perimeter jumper and wasn't afraid of harassing some of the tougher players (Isiah Thomas comes to mind).  He shot 57% from the field during the '86 championship run while playing 20 minutes per game in backing up Ainge and DJ.  He was the 3rd guard on that 86 title team, a team many consider to be the greatest of all time.  Of course many of you may even recall from Game 5 of the Finals when him and 7'4 Ralph Sampson got into it.  (Sichting, memorably, responded that he didn't know if it was a "punch or a mosquito" referring to Sampson's punch thrown at him). 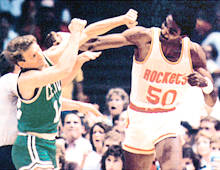 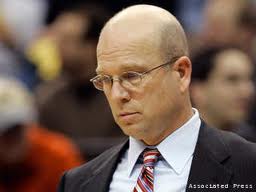 Sichting would stick around for the 1987 season and was on the floor during Bird's infamous steal vs the Pistons.  A lot of people loved Sichting but I was pretty stoked back in February of 1988 when he was traded for Jim Paxson.  I really felt Paxson was the missing piece that would push the Celtics past the Pistons and Lakers and win banner 17.  It didn't work out that way.

Jerry would last one more season with Portland and be waived in 1989.  He'd play with Charlotte and Milwaukee during the 1989-90 season before calling it quits.  He filed a grievance with the Hornets when after one game with the Bucks, their medical staff found a stress fracture that he'd been playing with.  He never heard back.


After an NBA broadcasting gig (with both the Celtics and Pacers), a director of scouting and player development under the Timberwolves and Kevin McHale and a few assistant coach positions in the NBA, including Minnesota and Golden State,  Jerry currently is the coach of his high school alma mater, Martinsville High School in Indiana.  If you read that article you can learn of the awkward situation Sichting entered into.


"Here's the thing," he says. "These kids -- seniors, especially -- had something happen that was totally unanticipated. Now? They're smiling and playing basketball again and, really, that's all I wanted out of this."

And although Jerry admits one more try in the NBA circuit may be in the cards for him, he really seems to be doing a helluva job restoring the Martinsville High School's Basketball Team's reputation.

8/6/13- **Addendum** Jerry apparently is no longer the coach of Martinsville HS, but has since moved onto the Wizards for the 2013 season and is now heading to be an assistant coach on Jeff Hornacek's new staff in Phoenix.

Special shout-out to Cort Reynolds for filling in some valuable information on Jerry's career.  Definitely check out his epic book on the 87 Celtics, "The Greatest Team That Should Have Been" and the Larry Legend Nostalgia Basketball book, located halfway down the page .