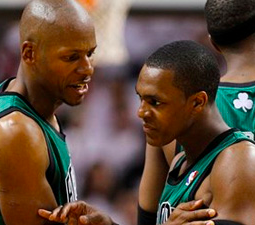 (Sports Illustrated writer Chris) Mannix said he's heard from people close to Kevin Garnett that the forward is leaning toward retirement, but if Garnett returns to the NBA it's likely to be with the Celtics.
"I think if Kevin Garnett wants to keep playing basketball, he will stay in Boston," Mannix said. "I think he's a loyal guy -- remember, he didn't really want to get traded out of Minnesota in the first place. He doesn't like to be a guy who's a mercenary, who wants to bounce around to different organizations and just chase rings like some other players in his age bracket. I think he wants to stay with one organization."
As for Ray Allen, his departure seems likely, with New York, Miami and Chicago leading the way as possible landing spots.
"There is going to be a ton of interest in Ray Allen in the offseason," Mannix said. "He's going to be able to pick and choose where he wants to play."
Allen conceivably could return to Boston, but Mannix said that decision might be affected by Allen's apparent struggles to get along with Rajon Rondo.
"I think there's no question that the relationship was strained over this year," Mannix said. "How strained is the key, and it's still a little bit unclear. There was some friction between those two. I think that could play a role in Ray's decision not to come back. Now, I agree, I think that Boston probably wasn't going to bring him back anyway, you're right, it's Avery Bradley's job and Ray isn't coming back to the Celtics to be a bench player, especially when he can be a bench player on a team that might be more likely to win a championship. But I think the relationship over the last year between Ray Allen and Rajon Rondo soured. Now, I'm not entirely clear as to how bad it got. But certainly I know that there was some legitimate, palpable friction between those two players and I think that will ultimately affect his decision in free agency."

I've kind of had the feeling that Rondo and Ray have had trouble getting along for a few years now. You always hear stories about Rondo having "friction" with the Big 3. I believe Donny Marshall has been a source more than once and whenever he's a source I just assume it came from his former UCONN teammate. I think KG and Rondo actually get along very well, so it's either Ray or Pierce. Definitely think it's more Ray though. Oddly enough you couldn't find a better point guard to play with for Allen than Rondo and his pin point passes. If they ask Ray about this "friction" I'm sure he'll deny it. No need to air dirty laundry.