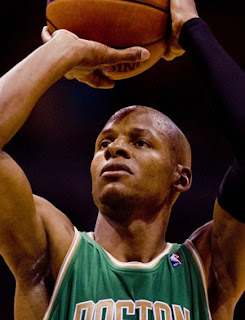 
Allen will have surgery to remove bone spurs from the ankle at 6 a.m. on Wednesday at New England Baptist Hospital, according to a source.

The problem, which first surfaced during in Los Angeles during the C’s’ eight-game road trip in mid-March, eventually forced Allen to miss 15 regular-season games as well as the first two games of the Celtics’ first-round playoff series against Atlanta.

But with a big summer of free agency looming, Allen vowed to take care of his ankle trouble as quickly as possible.

“That’s my first priority, just going into surgery sometime,” he said Saturday night. “If I (could) do it tomorrow, I would do it tomorrow. That’s probably my main concern right now, is taking care of that. My body feels good. That’s been my only issue. After that, it’s hard to say.

“There’s still a lot of basketball left in my legs,” said Allen. “I know that for sure. So it’s hard to say what can happen, what may happen. But four of us know how to play basketball. We know how to win games.”

Ray Allen should be commended for fighting through the pain in his ankles to play so many minutes this postseason. When Avery Bradley went under the knife their certainly wasn't another option. There was great fear in Boston going into the Heat series on how would the Celtics be able to shut down the explosive Dwyane Wade minus Bradley's D. Doc the brilliant coach he is came up with some great trapping schemes, which really put a dent into Wade's offense, but Ray deserves a lot of credit for his defense on Wade as well.

Right now it's looking more likely that Ray will be suiting up for another team next season, but stranger things have happened and he could be back in Boston. For that to happen Ray would have to leave a lot of money on the table, accept a bench role, get over the hurt feelings of essentially being traded at the trade deadline to Memphis for OJ Mayo, only to have that trade blow up (Danny Ainge had called Ray to inform him he had been traded), and possibly mend his relationship with Rajon Rondo. For his part, Ainge has said that Ray still has a couple good years left in him. That his struggles in the playoffs were injury related and not age related. I feel like Ainge is being sincere here, but then again it also doesn't hurt the Celtics to build up Ray's sign and trade value.

Good luck to the 3 Point King on his surgery Wednesday.