Perkins: KG on fence about retiring, will only play for Doc 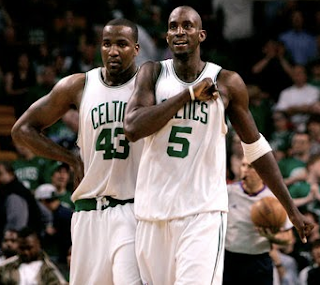 
Perkins spoke with his mentor, Kevin Garnett, a couple of days ago and came away with a couple of distinct impressions: 1) KG is conflicted about retirement, and 2) He won’t play for any coach other than Doc Rivers.

“He’s caught in between what he wants to do,” Perkins said. “This is his 17th year, so I don’t know. … But I wouldn’t be surprised if they do give one more go at it, just knowing their hearts and their competitiveness. They might go out there and give it another shot.”

The key here is that Perkins actually spoke to KG, not "a source close to the situation," so this gives this report more validity. Celtics fans want KG back, but if he doesn't return then retirement is better than seeing him in another uniform. There is a fear that KG could always change his mind. That he could feel slighted by the C's and sign on with another team. Remember he did change his mind about not wanting to play for the Celtics 5 years ago.

Still this is good news that the Celtics will definitely have the ball in their court if Doc can convince KG to keep playing. Also very cool to hear that Perkins still is in contact with his boys from Boston and if you read the full article you can surmise he still roots for them pretty hard.