Sometimes winning ugly can be a good thing 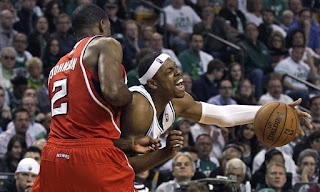 Friday's nights game was the worst win I've seen in a long time. It was hard to watch. Somehow Boston was able to pull it off but we really didn't deserve to win. Sure, Rondo had a triple double( the guy makes it look easy), but he was not his usual precise self. Pierce looked like he was hungover from the Game 2 heroics and basically the whole team came out flat. This was not the Celtics team I know.

However, these are the types of games championship teams win. You aren't going to come out and play your best every game. Sometimes you need to get a little lucky. Look, it's easy as fans to say and complain that professional athletes should be on point every single game, but they are human too. This was a classic let down game. Coming off one of the best road victories in Celtics history( huge statement but that's what I do), this performance really shouldn't have been a surprise.

The good news is we won't see another performance like that from the Celtics for the rest of the playoffs. I suspect Doc gave them a tongue lashing after that game and we'll come out tonight and dominate. Let's take care of this Hawks team and get one step closer to Banner 18.