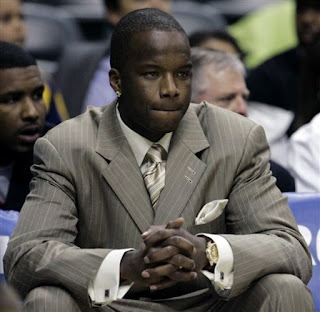 
When asked if his season would be over if he had surgery, O’Neal said, “It will be close. It’s a couple of different type of surgeries I could have. The issue I’m running into now is I’m 33 years old and I have a little boy and a little girl, and I went to pick my son up, and I couldn’t pick him up.

“We saw some changes in the MRI that long term you have to be worried about. I didn’t come to Boston for any money. I made a ton of money in my career. I came here to win a championship. Obviously, we’ve been up and down, but at some point in life you have to figure out just how much your body can take. I want to be able to function and that’s the conversation that I’m having now more than ever. Playing vs. functioning while I’m finished playing. That’s probably the biggest concern right now."

O’Neal said he will continue to work out while mulling his options.

“Whatever the decision is, it’s probably going to be the best decision of my life,’’ he said.

Jermaine suffered a wrist injury in a loss to Dallas on February 20th. You have to feel bad for Jermaine, who sounded confident he could put last season's woes behind him before the season.

It seems like this could possibly be Jermaine's last year in the NBA.