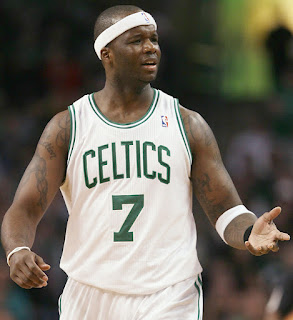 The Boston Herald reported today that Boston Celtics center Jermaine O'Neal will be out another 2 weeks with his wrist injury, and according to Danny Ainge, he will need surgery at some point. JO injured his wrist last season and opted not to operate on it.


After meeting with a hand specialist yesterday, O’Neal decided to forgo surgery once again, instead opting for a cortisone shot.

According to Celtics president Danny Ainge, O’Neal could be out for another 14 days while waiting for the pain-killing drug to do its work.

“He’s going to need surgery at some point,” said Ainge. “But he’ll play with it for now. He needed the surgery last season but wanted to play. Now, though, they think he’ll be ready to play in another 10 or 14 days.”

O’Neal has missed the last three games with the injury, and nine overall for assorted maladies. O’Neal is averaging 5.0 points, 5.4 rebounds and 22.8 minutes in 25 games this season.