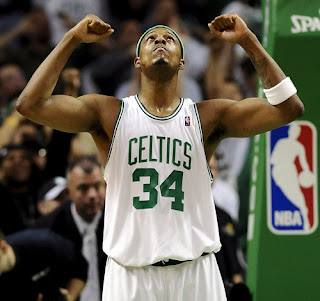 At the beginning of the season I was more than sure there needed to be a drastic change for our Celtics. The team´s performance was atrocious and more importantly: the soul of the team was nowhere to be found. Our defense was one of the worst in the league and teams abused us on a regular basis.

It was a heartbreaking period for Celtics fans.

The state of our Big Three was very depressing back then. Though Ray Allen kept shooting better than ever, his D left much to be desired. Paul Pierce looked 3 years older, slow and completely ineffective out there. Finally Kevin Garnett was a shell of his former self.

Only Rajon Rondo gave us some up, but it wasn´t enough.

Things have changed a lot in the last weeks. The team started playing much better, the defense came back and we became a gritty team again. The hustle, the clutch and the fight was recovered and we got our identity back.

The key to this all was the return of the best versions of Kevin Garnett and Paul Pierce. KG was scoring again, his rebounding and intensity were the vital signs of our identity that had vanished at the start of the season. As for our captain, he found his legs and he delivered masterful performances to get our team into a winning streak that lasted until the Lakers played in Boston last month.

Then we know what has happened: the trade rumors spread like butter on our daily toasts and we thought the team was on the verge of being dismantled.

Until KG showed why he is the spine and spirit of this team once more:

So before the team would venture off into the abyss that we know of as All-Star weekend, Garnett held an impromptu team meeting with a clear and very succinct Garnett-esque message.

If you're not ready to step your game up the second half of the season, step aside and don't come back because he doesn't want you and the Celtics don't need you.

The Celtics are back since, and Garnett has played his best basketball since he got hurt in 2009. With Rondo recovering his confidence after the comments on the media by Ainge, and more importantly by his coach, the team is running and being the aggressor once again. With the emergence of Chris Wilcox and Avery Bradley from the bench and the consistency of players such as Mickael Pietrus and Brandon Bass, the team is solidifying its identity and status in this crazy season.

I believe that the team is finding itself and the following matches are a real test for the players to show Danny that he shouldn´t make any (relevant) move in the next 11 days. They have shown they can change the future of this team and Ainge should still trust his current players.

A crucial date is arriving soon and it is not only the trade deadline:

March 10th, that is the rivalry matchup against the Lakers in the Staples.

The Celtics always test themselves against the lifelong hated rivals, the Lakers. And things normally vary and change depending on the result of their games. This year we digged ourselves a hole after our defeat at the Garden for instance. Beating the Lakers in their home court I believe would grant the current roster to remain almost untouched.

A loss could make Danny reconsider things. Keep in mind that Lakers have been rumored to be interested in at least three of our players: Rondo, Pierce and Allen. If he felt the team needs to be broken up to rebuild he may wait until after our game in LA to do so.

Finally, in order to add even more value to our game in the Staples, keep in mind that that match will be Pierce´s 1001 game in the league, all with the Celtics. I don´t think Danny will trade him before that milestone, provided he has made that decision already.

I believe in this team, my faith has been restored.

It is not time yet, this team is not dead.

We can fight once more, and it shouldn´t matter to us whether other teams may look stronger or fiercer.

We are the Celtics and we know that if we play like we should and like we have always done, then NOBODY can beat us.

If we show we are worth wearing that green and white magical jerseys then we are untouchable and invincible.

In our hearts, we know this is true. The players know it is true.

Let´s show it to Danny Ainge and the league.

Let´s show WE ARE THE BOSTON CELTICS