What the Hell Happened to...Michael Hawkins?

This week in What the Hell Happened To, we remember the 3rd alumni of Xavier (after this guy and this guy), 6'0 point guard Michael Hawkins. There's a remarkably scarce amount of information on Michael online.

Hawkins was a point guard who played 10 seasons throughout the NBA, CBA, and Europe.  His most proud accomplishment was being the Team Captain on the 1996 World Games Team where he set the record for most assists in the tournament.  Granted I may be biased being a Celtics fan, but I'd like to think putting on the Celtics' jersey and taking the floor would be a more memorable experience than the World Games.  But to each his own.

Hawkins had been in NBA camps before the Celtics.  In 1996 he was the last guy cut by the Blazers and earlier in the season, he had been in the Sixers training camp. 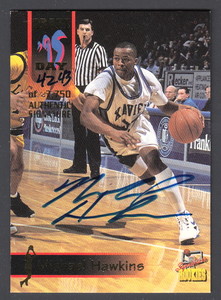 During his time in Boston under ML Carr, Hawkins wore #5.  He had signed two day contracts but then got injured badly when he separated his shoulder after running into...Tony Massenburg!  He woke up afterwards and said "and it was really sore." Trainer Ed Lacerte labeled it a Grade 1 separation.

They say the NBA is all about timing and place and that indeed happened for Michael.  After his second 10 day contract he was waived but alas: due to injuries to other guys, the Celtics decided to change their mind and ink Hawkins for the rest of the year.  All the hard work finally paid off for Michael:

"It was really frustrating to see other point guards get called up," Hawkins said. "It made me wonder if the NBA wanted me at all. I figured I'd go overseas, make some money, get established, and try again next year."  He examined opportunities in Greece, France, and the Philippines. He had made up his mind to make the move when the Celtics called just before All-Star weekend.   "I felt relieved more than anything else," he said. "I had put so much pressure on myself and it felt good to know that someone out there was watching."


Michael  actually appeared in 29 games for that wretched bunch that was trying oh-so-hard to land Tim Duncan, and averaged 2.8 ppg and 2.2 apg during his stay in just 11 minutes a game.  He'd be released by Boston at the end of the season in preparation for the Evil Emperor's Regime.  Instead of going through Michael's NBA Odyssey, I figured it'd be easier to show it: 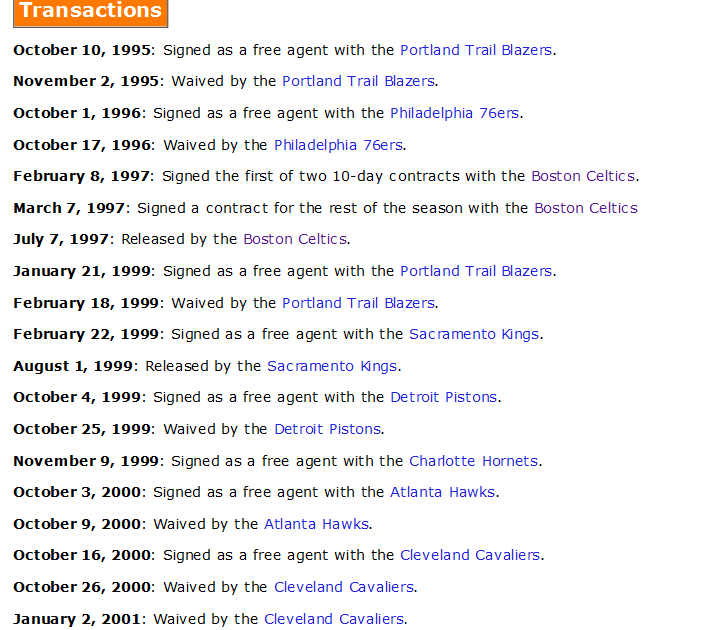 In Sacramento he actually appeared in two playoff games in 1999 right when the Kings were making their ascend to relevancy.

Today Michael lives in Houston, TX where he is an aspiring basketball coach.  He also values the advice of Teresa Kuhn, who has helped him manage his wealth wisely.  According to Michael's facebook page, he enjoys "chillaxing on the beach" and "chillaxing with the fam."  He didn't reply to a friendly email Celticslife sent him asking for more up to date information or what his proudest moment as a Celtic was.

**Addendum June 2015** Michael has headed up One-Up Basketball in an attempt to increase player's fundamentals.