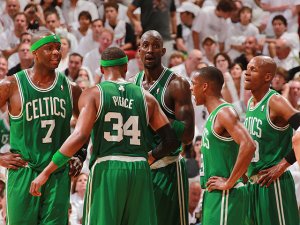 Jermaine O'Neal wanted a team meeting. The captain,Paul Pierce, thought it wasn't necessary at this time. According to a CSNNE report, it appears Kevin Garnett thought it was.


So before the team would venture off into the abyss that we know of as All-Star weekend, Garnett held an impromptu team meeting with a clear and very succinct Garnett-esque message.

If you're not ready to step your game up the second half of the season, step aside and don't come back because he doesn't want you and the Celtics don't need you.

At least one teammate was impressed.


Keyon Dooling, who like a number of Celtics has missed games due to injuries, felt Garnett's message could not have come at a better time.

The Celtics (15-17) had lost their fifth straight, and Garnett could sense that coddling - not exactly a strength of his, anyway - was not needed.

He spoke the way he plays; in a strong, but firm and consistent tone.

"We understand what's at stake," Dooling told CSNNE.com. "We have to start, here and now."

One thing to remember about all the people that criticize KG. None of them are teammates or ex teammates. To be completely honest, fuck anyone else and what they have to say. And I'm pretty sure KG feels the same. Nice to see one of our leaders stepping up. Still a lot of basketball to play.