The return of Gerald Green; Former phenom now a Net 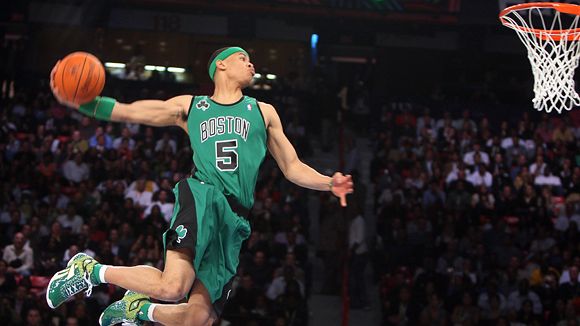 Way back in 2005, the Celtics were having a ho hum season. Not good enough to contend, but with Paul Pierce, Ricky Davis, and Al Jefferson, not bad enough to get a high lottery pick. Ticket sales were down. Danny Ainge made an odd move and traded a 1st round pick (and Gary Payton) to reacquire Antoine Walker, who had his greatest success in Boston. 'Toine reinvigorated the team. Ticket sales were up and the team passed the Pacers in the standings, giving them the home court advantage in the 1st round. The Celtics still lost, but then lost again on draft day.
Two players were falling in the 2005 NBA draft, college star Danny Granger and high school star Gerald Green. The Pacers who now were picking one spot ahead of the Celtics due to the C's late season run with 'Tione snagged Granger. The Celtics took Gerald Green one spot later. Granger became an all-star. Gerald Green became a bust. It took a while for Green to become a bust. He was billed as the next T-Mac (back when T-Mac was a bonafide top 5 player).
Before young Celtics fans swooned over the Avery Bradley's, Bill Walker's, JaJuan Johnson's, and Greg Stiemsma's of the world they absolutely were in LOVE with Gerald Green's potential. Not only could he drive and dunk, he had a beautiful stroke on his jumper. He was young and athletic and the sky was the limit. Unfortunately, he never learned to play the game of basketball. He could play one on one on the offensive end, but was horrible on defense and didn't know how to move without the ball or do anything resembling a basketball player besides shoot and dunk.
He's been out of the league for a couple years now, but at only age 26 he's getting another chance with the Nets this time, according to the NJ Star Ledger.

The Nets have signed Gerald Green, a free agent forward playing with the Los Angeles D-Fenders of the NBA Development League, to a 10-day contract. The move was announced by general manager Billy King in a statement released by the Nets.
Green has averaged 19.1 points in 22 games played for the D-Fenders this season. He also grabbed 4.6 rebounds while averaging 30.6 minutes per game. Green was recently named MVP of the D-League All-Star Game.

It's not a bad fit. The Nets suck and Gerald Green sucks, so they should make a nice match. The Nets need someone to score and Green can score. If given minutes, Green could put up some decent numbers in Nets losses. Maybe he even sticks for the year. Expect Green to be out of the league again next year, but if he proves me wrong it will be a nice story of perseverance. Maybe he can reinvent himself and start playing maniacal full court defense.  10 days to show us.