Are the Celtics being used to facilitate Howard trade to the Lakers? 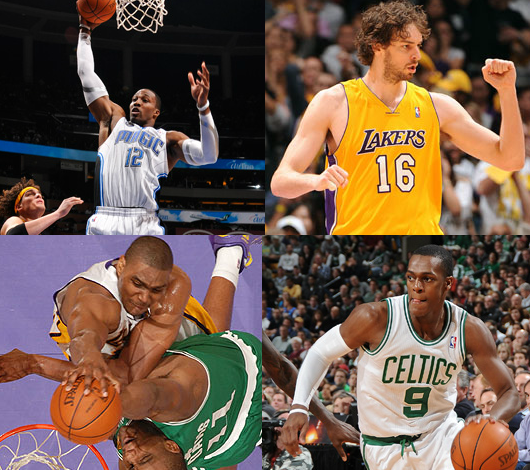 The two big rumors in the NBA this weekend were Rajon Rondo to the Lakers for Pau Gasol and an imminent Dwight Howard to the Lakers trade, which was denied by the Magic. Dwight Howard is the Lakers main target. So far they have offered Bynum to the Magic for him, which the Magic turned down. The Magic want both Bynum and Gasol for Howard and Hedo's poison pill contract, which the Lakers so far are balking at. Unfortunately for Celtics fans, there's a deal somewhere in the middle to be made by March 15th between these two teams.
The Magic need to be overwhelmed to move a player of Howard's caliber. Getting Bynum and Gasol, while getting rid of Hedo would do that. Even better for them would be if they could get two young all-stars. Bynum is one. The other would be Rajon Rondo. No one could argue that the Magic didn't get good value for their soon to be free agent if they were able to pull in both Bynum and Rondo. The Lakers know that Danny Ainge is willing to swap Rondo for Gasol. Now they are trying to figure out what else to get from the Magic for the Bynum/Rondo sweetheart deal.
With Rondo on board the Magic would be willing to move Jameer Nelson, who while no real star, he's still light years better than the corpse of Derek Fisher and Steve Blake. The Lakers could also very well squeeze Brandon Bass out of the Celtics. Danny Ainge has shown in the past that when he wants someone, he's willing to throw in a sweetener. When he wanted Robert Swift, he offered the Al Jefferson pick and an additional pick. When he wanted Ray Allen, he included Delonte West with the #5 pick. When he wanted KG, he included multiple first rounders, Ryan Gomes and Gerald Green to his Al Jefferson offer. When he wanted Chris Paul, he included Jeff Green with Rondo. Then when the Hornets wanted more he also included draft picks and JaJuan Johnson.

If the rumors are true that Danny Ainge has decided that Rondo is not part of the team's long term future and that he thinks Gasol and the Big 3 can make another run, he's not going to let Brandon Bass get in the way of the deal. It's not his M.O. to walk away from something he wants over a sweetener.

The Lakers with Nelson, Kobe, Artest (not calling that fool "Peace"), Bass, and Howard could contend this season and also possibly make a play for Deron Williams in the offseason. The Magic would have a top 5 point guard in Rondo and a top 5 center in Bynum to lead their new era. Howard wants to play for the Nets, because Shaq has spent so much time calling him out as trying to follow in his every footstep. The problem is that the Lakers have more to offer the Magic than the Nets do. Brook Lopez wasn't that good to begin with, and his one advantage over Bynum, health, was negated when he went down with his own knee injury this season.
Celtics fans are going to hate this 3 team trade. The vast majority wouldn't trade Rondo for Gasol straight up, let alone include Bass. The fact that many hate Gasol because he's a Laker (justified), his age (slightly justified), and because he's European (ignorant) doesn't help the cause. Then you add in how Ainge would be helping the Lakers get Howard and you just want to throw up. The problem is Danny Ainge doesn't care what you think and he's not going anywhere. The Celtics owners are fully invested in him. Rondo and Ainge won't coexist for much longer. If Ainge isn't going anywhere, you can guess who is.
Regarding who would play point guard for the Celtics it's anyone's guess. Avery Bradley is not a point guard. He's young, athletic, tries hard, and can dunk, so young Celtics fans love him, but he does not have starting point guard skills. He could develop into a respectable backup with a Randy Brown style, but Randy Brown wasn't a starter on any contending team. He was defensive game changer off the bench.
Then there's Keyon Dooling who ceased being a decent back-up point guard a few years ago, so he won't do. Delonte West would have been a decent stop gap, but he's gone.
Here are some names to consider: Goran Dragic (McHale hooks Danny up), Aaron Brooks (playing in China and probably would demand more than the prorated minimum, but getting a chance to showcase his skills for a few months next to Ray, Pierce, KG, and Gasol might persuade him to sign), Ramon Sessions (would probably have to part with a 1st rounder), Raymond Felton (also would have to part with a 1st rounder), Gilbert Arenas (not likely at all), Allen Iverson (even less likely), or Juan Carlos Navarro (former teammate of Gasol in Spain and Memphis).
Regardless what you might want as a fan, expect to hear a lot of rumors these next couple weeks. There is no one safe on this team. Trading Rondo would suck. Helping the Lakers would suck possibly even more. Both are very possible. Brace yourselves.