What the Hell Happened to...Rickey Green? 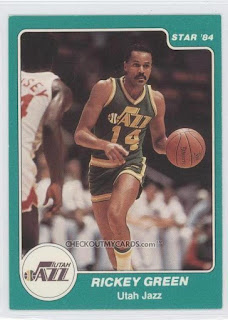 He's the first "Green" we've had in our What the Hell Happened To segment, but certainly won't be the last, with Orien, Gerald, and Jeff still out there (Si Green would definitely be a part of this if he didn't pass away at such a young age).  If I didn't research him thoroughly, I wouldn't have realized how good a ball player this week's WTHHT player Rickey Green was.

After a standout career at the University of Michigan, which saw Green be named to the All American team, Rickey was drafted in the first round of the 1977 draft with the 16th pick by the Golden State Warriors.  Barely a year later—after a lackluster rookie season with the Warriors and a brief stint with Dick Vitale's Detroit Pistons—Green found himself playing for the Hawaii/Billings Volcanos of the CBA. However this proved to be a turning point in Green's career. 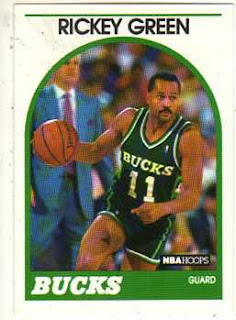 The CBA offered Green the chance to transform himself. He learned how to set up his teammates and pick his spots to shoot. When Utah Jazz coach and general manager Frank Layden gave him a second chance at the NBA five games into the 1980-81 CBA season, Green seized the opportunity. After a solid season as a backup for the Jazz, he earned a starting spot the following year, and during his six seasons as a first-stringer he averaged 12.8 points, 7.6 assists and 2.03 steals. In his lone All-Star appearance, in '84, he was named co-captain of the Western Conference team.  A fun fact to know and tell about Green: in 1982, he scored the 5 millionth point in NBA history.

Through an eight-team, 14-year NBA career, Rickey watched the game he loved reinvent itself while he was reinventing himself.  Early on in his career, he was really well known for his incredible speed, earning the title of "league's fastest point guard" by many.  But as the last Utah Jazz point guard before the great John Stockton knew full-well, if he didn't learn to distribute the ball and hit the open man, he wouldn't have been able to last as long as he did. 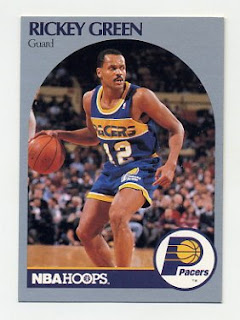 His final season was in 1992 with the Celtics.  And while he did appear in 26 games for the Celtics he was waved in March of 1992, before getting a chance to play with Bird and company in the playoffs.  That Celtics' team had John Bagley, Dee Brown and Sherman Douglas to play point guard.

I only saw him towards the tail end of his career so before researching him I had sort of lumped him in with Jay Humphries.  But that would be a disservice to Green, who actually made that all star appearance, something Humphries never really came that close to.   Based on his basketball card collection, you'd think Rickey Green only knew how to dribble.  You'd be wrong again, since Rickey lead the league in steals per game in 1984 and finished 3rd in assists per game in 1983.  Amazingly enough I do remember him on the 76ers in 1991 but wouldn't have known he averaged 10 ppg at age 36 while starting in 75 games.  That's an impressive feat for anyone close to 40. 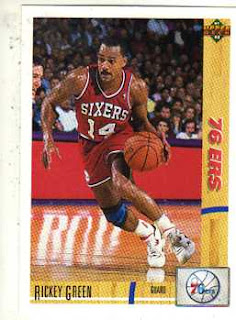 After retiring from basketball Rickey started a landscaping and snow removal service in the Chicago area.  His daughter, Kandyce, played 4 years of college basketball at Lake Forest College.  Today she works as a dental hygienist at Family Dental Care in Illinois. As for Rickey, today, he is the Assistant Recreation Director of the Cook County Forest Preserve.  He has worked there for the past 12 years.