In last night's 87-56 victory over Orlando, Avery Bradley's constant pressure on defense inspired the rest of the Celtics to turn in one of the team's best defensive performances this season.

However, Avery revealed in a post-game interview that his full-court pressure annoyed Magic point guard Jameer Nelson so badly that Nelson actually asked Bradley to ease up. According to Bradley, Nelson begged him to back off: "I looked at him and he kept telling me throughout the game... 'don't pick me up.' And that's when I knew that if I brought pressure, he didn't want nothing to do with it."

Keep in mind that Nelson is a seasoned veteran and a former NBA All-Star, and he is complaining to a 2nd-year back-up point guard who barely got any playing time in his rookie season. Listen to more quotes from Avery's interview and watch highlights from the Bradley-Nelson match-up in the video above.

Avery went on to tell the media that "It got to a point where he didn’t want to bring the ball up... That’s when I knew I was having an effect." And apparently this isn't the first time Bradley has frustrated his opponents. "I can tell (when they get frustrated). Sometimes they talk to me... They’ll say you can get back a little bit, you don’t have to pick me up all the time, and when they start talking to me like that, that’s when I know I’ve got them... Everybody says it to me – everybody. I just laugh. I might just look at them, I’m going to keep coming all of the time."

Even Orlando fans were dumbfounded that Nelson would tell Bradley to ease up. In today's edition of "Comments from the Other Side," Magic fans had some funny reactions to Avery's interview, including: 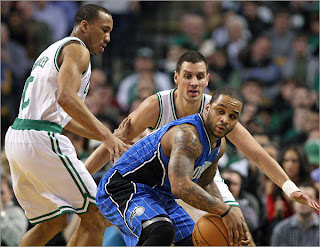 "Anybody else watch Bradley's interview on NBA TV? He said Jameer kept telling him to not pressure him and he said that it seemed like Jameer did not want to bring the ball up. Why would you say that to a player guarding you?"

"What the hell is that Jameer?! You gonna let Avery friggin' Bradley get into your head. [How] are you gonna tell an opposing player to stop covering you so close?! What the hell?! That is called DEFENSE…it actually exists, Jameer. You should try to learn it."

"Otis, you need to move Jameer, even if it's for some fries and nuggets. That's the last straw. I can't defend a player who begs for mercy."

Hopefully Nelson won't be the last player this season to get annoyed with Avery's defense, as it seemed to work pretty effectively. We will see what adjustments Jameer makes on Thursday night, when the Magic rematch the Celtics in Orlando. Rajon Rondo is expected to return to the line-up and reclaim the starting point guard role, but I have a feeling Avery will see significant minutes off the bench after his stifling performance last night.