What the Hell Happened to...Em Bryant? 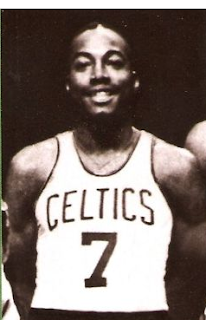 If I were to tell you there was a Celtic named "Bryant" who scored 20 points against the Flakers in a Game 7 you might say I have the teams wrong (or you may guess Mark Bryant).  But then you wouldn't have remembered this week's WTHHT feature player, Em Bryant.

I tend not to do well with the movies that interchange from the past to the present; I find myself lost.  But I'll give it a try.  Fast forward to 1992, when the National Basketball Retired Players Association (NBRPA) was formed by basketball greats Dave Cowens, Dave Bing and Oscar Robertson to promote basketball and enhance the sport’s image. These former stars shared the goal of assisting retired players with a variety of services including career transition, pension issues, providing comprehensive health care coverage and encouraging community service for charitable activities, special appearances and international basketball tours. [Not one of these services seems prevalent to Michael Stewart.  Great job Glen Grunwald with your "wink-wink" deal making Stewart set for life with only a twitter account to prevent him from having literally fallen off the face of the earth.  I wonder if Stewart sends Grunwald an annual gift.] 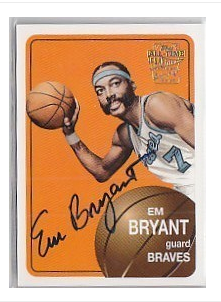 From 2007-2010, Emmette Bryant, Jeff Mullins and Earl Monroe have been serving as board members of NBRPA. Their efforts have not only met, but exceeded the organization’s goals and objectives. As of February 2010, they will make way for the election of new members to serve the next term.  However things didn't always look so promising for Bryant.

Bryant grew up on Chicago’s Westside and as a youth in the early 1950s, excelled in grammar school academics.  This allowed him to move onto high school at age twelve. In athletics, he was just average and did not rank among the elite in his community (Bob Bigelow knows all about this!). At McKinley High School, the play of future Harlem Globetrotter, Leon Hilliard, caught Bryant’s eye. Hilliard would break out his dribbling routine that would make him famous, and would also inspire Bryant who emulated his ball handling skills.
At the time Emmette had an attraction to the big city street life, which found him occasionally dropping in on classes but hanging out more in the streets.  By his sophomore year, Bryant was no longer dropping in on classes; he dropped out, without ever playing one day of high school basketball.

Bryant’s truancy landed him in a reform school for boys in St. Charles, Illinois, located about 40 miles west of downtown Chicago. The purpose of the school was to provide young boys with a good education, vocational training, along with religious and military training. After this Bryant enlisted in the United States Air Force in 1955. He trained at Sampson Air Force Base in New York, and became a skilled radar operator, prepared to scramble fighter jets at a moment’s notice to any blip on the screen that appeared to be hostile, threatening or unidentifiable. Bryant was stationed at the Panama Canal, and played for a Panamanian and U.S. team that both won championships during his tour of duty. One of the servicemen, who had an opportunity to play with the Baltimore Colts, told Bryant that his skills were outstanding and that he was better than most players, and should consider going to college.

Bryant returned home to Chicago and enrolled at Crane Junior College where he averaged 36 points per game. Along the way, Coach Ray Meyer of DePaul University had seen Bryant play, and invited him to come to DePaul. In 1960, Emmette Bryant set all kinds of freshman records that held until Mark Aguirre, enrolled at DePaul in 1978. Four years later, Bryant was graduating from DePaul with a degree in Physical Education, and was being drafted by the New York Knicks as a guard and the Dallas Cowboys as a defensive back.

Bryant chose to play for the Knicks, and arrived in New York in September of 1964, joined by two other rookies; Jim Barnes, the overall number one selection of the NBA draft and 2nd round first selection, Willis Reed.  After 4 years with the Knicks, he'd be plucked by the Suns in the expansion draft of 1968.  It turned out to be the best thing that ever happened to him.

I was getting ready to give up. Phoenix made a firm money offer, (it) was only a token raise over what I was making in New York.  I couldn't afford to go there for that money. 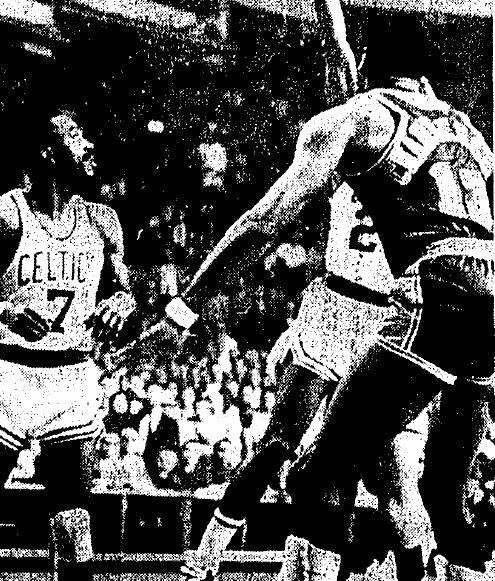 At the time Em was working for the Negro Industrial and Economic Union in New York at a job he didn't want to quit (remember this is when NBA players had second jobs).  However before ever getting to play a game for Phoenix, the Celtics came calling; he was shipped to Boston for a future second round pick.  Bryant signed for the Celtics for the same money Phoenix would've paid him, the reasons being:


I know (Bill) Russell and Sam (Jones) and (John) Havlicek and I think I'll enjoy playing with them.  I'd like to learn what makes them win.  You know with the Knicks we had a powerhouse but the Celtics would always win.

[TB Tangent time: This is how you know things were different then vs today.  A guy goes to Boston over Phoenix?  I guess the suns didn't have a revolutionary medical staff and Phoenix, AZ wasn't considered a city with flawless weather.  Imagine that "mystique" making a difference?  Grant Hill had that same opportunity back in 2009 and he opted for Phoenix over Boston.  Who knows, maybe Hill goes to Boston (instead of Marquis Daniels) and that gets them over the top in 2010 after Perk gets injured.  Then maybe Grant Hill is revered the way Em Bryant should be.  More on that shortly]

Em found out how Boston was different than NY:

There's a lot of great guys on the Knicks but they're all individuals.  Here the guys all hang out together.  In New York all the guys had their own homes and went their own ways.

His first year with the Celtics he was used mostly as a defensive stopper coming off the bench to provide energy.  However he'd break into the starting lineup for some of the games, none bigger than Game 7 of the 1969 NBA finals in Los Angeles. With a heartpounding 7 minutes and 5 seconds to go and the Celtics out in front 101 to 89, Emmette Bryant was the fast moving point guard, guiding his team toward victory with 20 points. This was a title fight and the Lakers wanted a parade, too.  I've watched this game and while Bryant only had 2 in the fourth, he played the entire quarter.  People who aren't too familiar with the Celtics' history may have just assumed that Cousy and KC Jones were the point guards for those title teams.  The fact is, Em Bryant was totally the guy in 1969.


After one more season with the Celtics, Bryant would be drafted by the Buffalo Braves in the expansion draft of 1970.  He'd play 2 years with Buffalo before retiring from the league in 1972.  Immediately after his playing days, Bryant became an assistant coach; one year at Columbia University in New York and two years with the Seattle Supersonics. All along the way, Bryant would say, “I’m just a teacher that happened to play pro ball.” Bryant then went to work for the State of Washington for the next 30 years, starting out with the Department of Social and Health Services (shoutout to Zaid Abdul-Aziz), in charge of recreation throughout the state for that department’s correctional institutions (shoutout to Dave Popson). He later became the Recreation Director at Mission Creek Youth Camp.

Em retired from the NBA Retired Players Association in 2010 and today, is living back in Chicago. He still plays basketball weekly and even won a championship 2 years ago in a league age 70 and older.  Don't underestimate the toughness of Em Bryant.  There's a part of me that feels that if Em was the point guard for the 2010 bunch, they may have pulled it off.