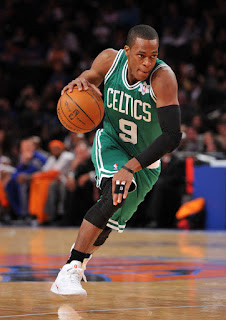 A winner never likes "moral victories". But if there was such thing as one it was yesterday's 106-104 loss to the Knicks. The Celtics were thoroughly outplayed in the first half, but came back and dominated the second.

If Paul Pierce is in that game the Celtics win and I don't think anyone can dispute that. Regardless of the questionable reffing in the end, if you don't have your best closer on the court in the waning seconds of the game chances are you aren't going to win.

Here's the reality. It really doesn't matter about wins and losses during this first month. The Celtics need to concentrate on building team chemistry and seeing how their new additions fit in. Speaking of new additions,Big Baby who? Brandon Bass was a flat out man child yesterday. Yes, it is just one game, but I can't remember the last time we had someone crash the offensive glass like that. Not even Perk came close to what Bass displayed on Christmas Day. If Bass performs likes he did yesterday consistently we will be a force to be reckoned with. My thoughts on Rondo after the jump.

What I saw yesterday was that Rajon Rondo has gotten even better than last year. His shot looks better. More importantly, he hit his free throws(9-12). He dominated this game in every facet and continues to show why even though he may not be the best point guard in this league, he certainly is the most unique. I take back my previous statements about Chris Paul. For this team there is no point guard I'd rather have on my team than Rajon Rondo.

I think this is just the beginning for Rondo. Despite what some people  think, I believe the trade rumors have fueled him to become a better player than ever. Despite Carmelo's performance yesterday, Rondo was the best player on the floor. He is a one man fast break and sees the floor as well as any point guard in the league. If he can continue to hit that open jumper and shoot 70% or above from the line he will be virtually unguardable.  The NBA should be prepare to be Rondo'd nightly.