What the Hell Happened to...Kenny Battle? 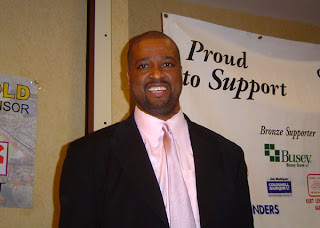 It was a snowy Monday in NY back in January of 1992, when a man named "Battle" donned the Celtics jersey, with the number 8.  In only his second game with the Green, he'd score 10 points on perfect shooting, in an impressive Celtics win in Cleveland.  That'd be a preview of the Eastern Conference Semis, the last time Larry Bird would wear a Celtics uniform.  Unfortunately this week's What the Hell Happened To feature player, wouldn't be on the team by then.  You definitely remember Kenny Battle.

In college Kenny attended Northern Illinois before transferring to the University of Illinois Urbana-Champaign.  Along with future pros Nick Anderson, Kendall Gill and Stephen Bardo, Kenny helped lead UI to the Final Four in 1989.  Looking back, that Illinois team was loaded and probably should've won it all.  Battle was the emotional leader of the team.  If you watch this video, it discusses his unyielding energy and how his relentless play persevered in his teammates:


After that memorable season, Kenny would be picked in the first round of the 1989 draft, with the final pick of the first round, by the Detroit Pistons.  However he'd be traded draft night with Micheal Williams (nope not misspelled) for Anthony Cook.  His rookie season with the Suns in 1990 was the longest he'd play for one team when he stuck around and played 59 games and 8 playoff games, which included the Suns walloping the Enemy in the second round [in case you forgot, that was the season where the Flakers realized Magic was becoming a defensive sieve as Kevin Johnson obliterated him]. 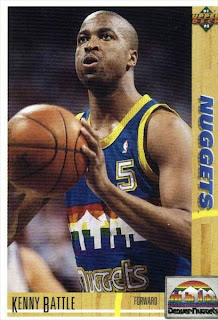 The next season Kenny would be waived by Phoenix in January of 1991, and would finish the season with the Nuggets.  It was on to Boston.

In addition to the nice performance in Cleveland that got the Celts a road win against one of the top teams in the league, Kenny would only appear in 7 more games and score 4 more points total.  For his time on the Celtics, he shot a perfect 8-8 from the foul line.

But alas, Kenny wasn't done in Boston!  He'd play for 3 more games the following season after being waived by Golden State, whom he had latched on with after Boston released him the first go-round.  Two more free throws, and two more makes.  10-10 from the line in his time on the Celtics.  I wonder how many other Celtics have shot perfect from the foul line during their Celtic career with a minimum of 10 attempts? 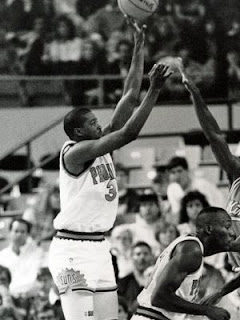 In fact when I first saw Antoine Walker play in a preseason game against the Knicks in 1996, the guy I was instantly reminded of was Kenny Battle.  Of course Kenny's handle wasn't quite as smooth as Toine's but the size (I could've sworn Battle was 6'8 but his basketball-reference page has him listed as 6'6; no question today he'd be listed at 6'8), body type was very similar while they both sported #8.  In hindsight Kenny was more of a tweener than 'Toine.  Sort of like Corliss Williamson, although Corliss was the more skilled player and adapted surprisingly well to playing more at the small forward during his NBA career.  Imagine if Antoine's skills could've been combined with Kenny's heart?  We may have been looking at a big-time player.

Each season at the University of Illinois they give out the Kenny Battle Inspirational Award to the player who shows the most hustle during each year (Off the top of my head these are two guys who would never have won that award).

Today Kenny is the head coach of the AAU Team KB Hoops in Illinois.  I'm guessing the KB are for his initials.  Their mission statement is: 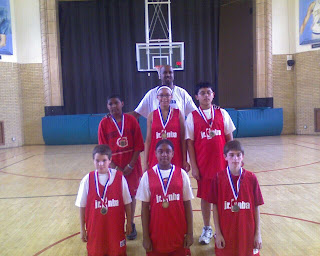 KB Hoops was started in 2005 by Kenny Battle to promote youth basketball in a fun and safe environment. We promote good habits on and off the court. We teach fair play and good sportsmanship.

Kudos to Kenny for giving back to the community.  I wonder if the champ of Illinois could face the champ of Ohio.  Then we could have a Kenny Battle-Ronnie Grandison showdown.  That'd be amazing.