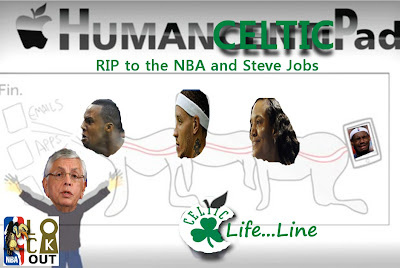 As all of you are well aware by now, the CEO and founder of Apple, Steve Jobs, passed away yesterday at the age of 56. In lieu of this news, I've decided to postpone my original post for this week (My top 15 celtics' players from 96-2011) until next week so that I could properly pay homage to Jobs' ingenuity through satire.


The Inspiration
On the brink of the new iPhone 5 release, Steve Jobs and his evil twin brother, David Stern, start to conjure up their next big idea. They sit down to watch a scary movie while eating some jiffy pop. Ever the dumbass, Stern suggests they watch the new indie film, The Human Centipede. They do....and neither of them enjoy what they are seeing. Jobs shuts the movie off and flips on Comedy Central to unwind. Little did he know, that South Park was airing a spoof of him and the cinematic atrocity he and his evil twin just escaped. Intrigued, Jobs looks at the schematics of Matt Stone's and Trey Parker's Human Centipad and thinks...maybe it can be done.
The Design
Jobs rushes into his laboratory and quickly gets to work on the new prototype. Right as he is about to put the finishing touches on his new project, his conscience comes into play. His good side, voiced by James Earl Jones, tells Jobs not exploit humans for the sake of technological advancement. The bad side, voiced by Roseanne Barr, tells him to finish it and release it instead of the iPhone 5. As Jobs quarrels with his conscience, evil brother Stern sneaks in and steals his schematics. Stern, always the disrespected brother/commissioner, vows to never be mocked again (insert Dr. Evil's evil laugh here).


The H-CP
Stern quickly puts to work all of Jobs' ideas and transforms his Human Centipad into the Human CelticPad (HCP). This invention, he claims, will rid Celtic fans and NBA fans alike of the lockout fiasco by feeding them ridiculous lies and news about how great his organization truly is. He also claims that the HCP will stream constant updates about your favorite players as well as apps that conjure up dirt/rumors about your least favorite. Stern's first prototype is specifically designed for fans of the Boston Celtics. It is made by infusing together Big Baby, the one they call Butterscotch and Ms. Gloria James. If fed enough junk, the HCP should become the leading anti-Lebron device in the world. There is also a downloadable Shaq-Kobe-Kate Faber model that keeps everyone up-to-date on how Shaq's ass is currently tasting.

The Tragedy
Upon creating this device, Stern begins feeding the HCP a string of healthy foods-- an all vegetarian diet-- which deeply enrages the Big Baby. Big Baby leads the HCP and lunges toward the old, obese Stern. But just as the HCP is about to devour Stern, good twin brother Jobs comes in to protect his kin. Jobs dives towards Stern pushing his brother to safety as Big Baby and the HCP get their first non-veggy meal. Stern scampers away out of the house and into the night. No one knows where Stern went or what he plans to do now that his smarter and nicer brother is dead. But rest assured, everyone still thinks he's an ass. END THE LOCKOUT!
RIP Steve Jobs.

Dane(a) B(arros)
After graduating high school in 2006, Dane realized he had to prepare himself for the "real world". Ever since then, he has been writing based on his first hand experiences of heartbreak and rejection. Dane prides himself in being both a rapping satirist and realist. He only writes about things he knows in hopes that one day his introspective hip-hop will make him a better person. He appreciates any and all those that can relate to his music.
Newer
Older