What the Hell Happened to...Gene Conley? 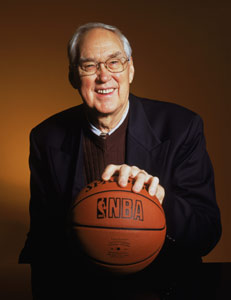 When most people today think of professional two-sport stars, they think about Bo Jackson or Deion Sanders.  A lot of people might remember Dave DeBusschere too.  But the only guy to win an NBA Championship and World Series is this week's What the Hell Happened To feature, Gene Conley.

Like I've done throughout the history of WTHHT, I decided to go the extra mile and educate myself on the career of Gene Conley.  I was able to do this by purchasing One of a Kind, a biography on Gene's life written by his wife Kathyrn.  Maybe it's because I just got done reading books by Harlan Coben or maybe writing isn't her thing, but the book was the worst thing I've ever read, to the point I gave up and began skimming through sections.  It provides an incoherent rambling of ideas sowed together by "chapters" detailing their life.  "Gene went to the shipyard and then to the ballpark and then to the hotel, and then stopped at church."  Kathryn seems like a terrific person but reading this book made me seasick, the way it jumps around.  It may have been prudent hiring someone to proofread or edit it or write it for her.  She focuses on the most mundane details while babbling about their life.


Gene earned 10 cents an hour at his first job, and got a raise at his next job at 15 cents an hour.  They would frequently send each other telegrams when they were away.  Car air conditioning hadn't been invented when they made one of their multitude of cross-country trips. 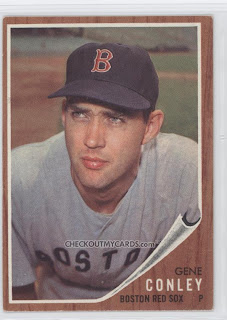 By far the most interesting story is while with the Red Sox, Gene and teammate Pumpsie Green (the first black Red Sox player) got off a bus that was just sitting in traffic near the GW Bridge after a lousy weekend playing the Yankess [I've been tempted many times to get out of my car near the GW Bridge and just leave because of traffic].  Gene got up and walked to the front telling Pumpsie on his way that he "had to go" and asked if he wanted to go with.  Pumpsie obliged and followed Gene off the bus.  After they walked to a place to use the bathroom, they came back and the bus was gone.  Undaunted by this, they decided to go to a bar.  After drinking his face off, Gene told Pumpsie he was going to Jerusalem.  Pumpsie, knowing he'd be facing a fine decided to fly back to Washington to meet his Red Sox teammates.  Gene continued to get sloshed at multiple bars and then ordered the ticket to Jerusalem.  When he arrived at the gate, the word had gotten out to several reporters.  However Gene didn't have a passport and wasn't able to board the flight, so he went and stayed at the Waldorff Astoria, the super expensive hotel near Grand Central Station in Manhattan.  When he woke then next day, he saw headlines in the paper of "Conley being AWOL."  They had checked with his parents back in Washington who hadn't heard from him and some were beginning to think he was suicidal.  But Gene never left, and finally came back to the Red Sox, first with the intention of retiring since he had embarrassed himself and his team.  Eventually the Red Sox agreed to fine him $2,000 (in addition to the 4 days he wasn't paid for missing) and he returned.

Reading this book made Zaid Abdul Aziz's story seem like he was a Pulitzer Prize finalist.  If Clif (not Robinson) of "Clif's Notes" ever wants to make a version of this book, I'd recommend reading it.  Otherwise, avoid it all costs.

Prior to retiring Conley and his wife ran their own business for 35 years in Foxboro, Massachusetts called the Foxboro Paper Company (I didn't know paper companies really existed, other than Dundler-Mifflin).

“I was the CEO and she was the President,” said Conley. “We had a couple of people help out, but it was what you called a low overhead business. We made it work real well for 35 years.”

Gene and Kathryn lived in Orlando up until 2009, but have since moved to Waterville Valley, New Hampshire.

Gene will always be remembered for his ability to play two sports for as long as he did.  I just wish reading about it could've been more enjoyable than it was.