What the Hell Happened to...Brett Szabo? 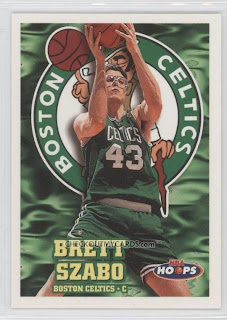 There's longshots to make it in the NBA.  For every over-hyped bust that never lives up to his potential there's a guy who gives it his all and makes it.  Out of nowhere.  This week in the 100th article of What the Hell Happened To we remember a guy who exemplified this, Brett Szabo.

Brett was truly a guy who defied all odds.  28 year old rookies aren't a common thing in the NBA unless they were playing in Europe.  Division 2 players are even more rare.

Two days after graduating from Augustana, Szabo was on a plane to Australia. A team had offered him a job where he played for a year. Then came a succession of CBA stops. He returned to Sioux Falls and played in the CBA franchise there from 1991-93. He also had stops in Rochester, Rockford and Harrisburg. In 1996 he went back and played for Landshut in Germany. 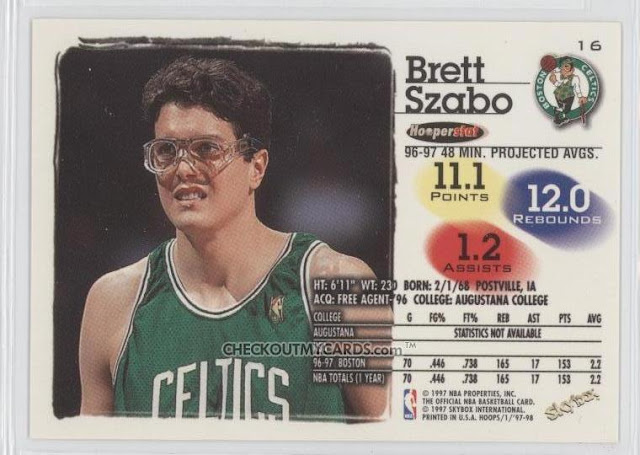 M.L. Carr took credit for Szabo. He said he noticed him working out at Brandeis (the Celtics old workout facility) with agent Guy Zucker, who occasionally brought his players to play. Carr played a little with Szabo and put the memory in storage. Then, when big men started getting injured in training camp, Szabo was signed a week into camp.  Brett was stoked:


"This has always been a dream of mine," he said. "I have bounced around quite a bit. But I know there are no guarantees. I realize I'm not getting a lot of opportunities. I have to go out and play hard every day in practice. You never know what's going to happen."

He'd hang on for that entire season, getting signed for the remainder of the year after initially being signed to a 10 day deal.  He'd average 2 points and 2.5 rebounds per game in a little more than 9 minutes a night.

And then there were the goggles.  Everyone remembers the goggles.  There was a medical reason behind that though as Brett suffered from double vision.   So those corrective goggles were essential for him to play with.

Granted it was that horrendous 1997 crew that looked like it was the cast for Major League, tanking to get Tim Duncan.  But Brett appeared in 70 games, or twice as many as Steve Hamer, their second round pick did.  Brett's time with the Celtics was interesting to say the least.  In fact there's this bizarre highlight reel out there that I wanted to share:

Brett would be released after that season and there's not a whole lot of information on if and where his playing career resumed.   I'm proud to say I saw Brett appear in a game vs the Sonics in November in Boston.  He scored 2 points and had 5 rebounds in that game.

Unfortunately for only the second time in WTHHT history (Michael Stewart) I can't exactly tell you what Brett Szabo is up to.  I certainly have located him :-)  It appears he is married to Stacy Showers Szabo and they live in Sioux Falls, SD.  They have 2 daughters, one named Anezka.  Brett's father Leon sadly passed away in September of last year.  I believe the Szabos live on South Woodwind Avenue in Sioux Falls.  Maybe if any Celticslife readers are around that way they could stop and check in with Brett and see what he's up to!   Does Brett coach?  Is he a teacher?  Based on the trends of WTHHT, I wouldn't be surprised if he's dabbled in some real estate.

I also believe the Szabos are close friends with the Petriks, who have a website.  There is this picture- could either of the two tall guys standing in the back be the one and only Brett Szabo?!  (He does have a brother Mark which may account for whichever one is not Brett).  One is on the left hand side right where the house splits off and the other is less visible on the right hand side.  They both appear to be bespectacled. 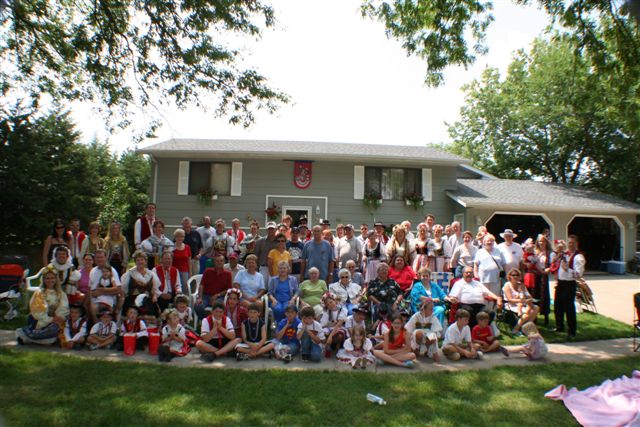 I feel this is like playing "Where's Waldo?" but instead its called "Where's Szabo?" 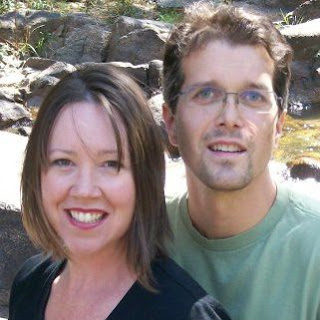 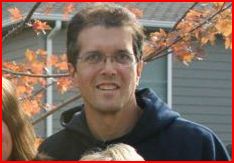