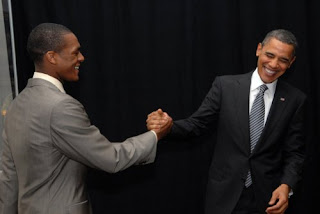 So Shaq has a book coming out in a month (Big Surpise) and he adds a new rationale for Rondo's late season slump. Shaq says it wasn't the Perk trade or injuries, but an Obama "diss" that messed with Rondo's game.

In early March some of the guys went to the museum of Fine Arts for a fund-raiser and got to hang with President Barack Obama. Everyone was a little bit in awe. The President turns to Ray, points at Rondo, and says, “Hey, Ray, why don’t you teach this kid how to shoot?” Everyone starts laughing.

KG told me he saw the look on Rondo’s face and the kid was devastated, embarrassed. Dissed by the President, even though I’m sure Obama didn’t mean any harm. Rondo smiled and went along with all of it, but KG told me he could see it in his eyes. It bothered Rondo. It killed him.

The next day Rondo shot the ball horribly. He stopped taking shots after that. He’s so sensitive. I think it was a real jolt to hear the outside perception of a basketball fan who happens to be the President of the United States. It messed with his mind. I’m sure of it.

Now Shaq sometimes gets stories mixed up. He's not the brightest one you should know by now. Recently he was talking about how Danny Ainge was a bad ass, because he once bit Tree Rollins, when in fact the reverse was the true story. So maybe he mixed it up and Rondo dissed Obama? Ha.

Do you buy Shaq's Obama excuse?