What the Hell Happened to...Tony Massenburg? 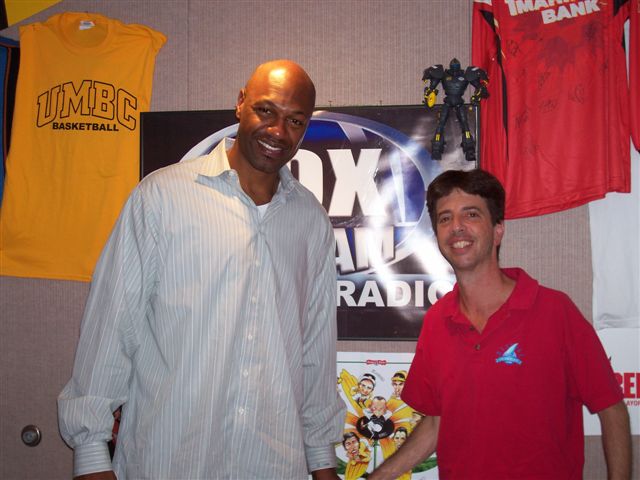 Chucky Brown, Joe Smith and Jim Jackson share the unique distinction of having played for the most different NBA teams (12) with this week's What The Hell Happened To featured player.  He had two stops in Boston, only playing the first-time around.  If you followed the Celts in the 90s, you definitely remember Tony Massenburg.

In true WTHHT-fashion, Tony epitomized a journeyman; a lot like Junior Burrough or Larry Robinson.  Back in 2005, SI.com had a great article on Tony, showing everywhere he played and his thoughts from each stop.

So buckle up, you're about to read the entire Tony Massenburg journey: 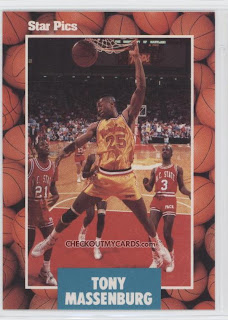 1. SUSSEX, VA. (1981-85) Averaged 17.5 points and 12 rebounds as a senior at Sussex Central High. Has fond memories of Mama Massenburg's cooking, which he still goes home for. "Between her fried chicken and my grandmother's sweet potato pie, I try not to come back too thick," he says. Stayed: four years. How it ended: signed with University of Maryland.
2. COLLEGE PARK, MD. (Terrapins, '85-90) Massenburg was team MVP as a junior and senior and got his degree in human ecology.  Teammate of Len Bias. Stayed: five years. How it ended: drafted in second round by Spurs.
3. SAN ANTONIO (Spurs, '90-91) Rookie seldom saw action. Stayed: 35 games. How it ended: waived.
4. CHARLOTTE (Hornets, '91) "I have no fond memories of Charlotte," says Massenburg, who played three games there. "I lived out of the Hyatt by the arena. I wasn't feeling it." How it ended: waived.
5. BOSTON (Celtics, '92) "I enjoyed the clam chowder at The Four Seasons, but that's about it," says Massenburg. Stayed: 20 days. How it ended: released.
6. OAKLAND (Warriors, '92) "My first time out West, and my impression was: I can play here but not live here. Me and Chris Gatling would hop in his convertible and drive to San Francisco." Stayed: 20 days. How it ended: released.
7. REGGIO EMILIA, ITALY (Reggio Emilia '92) Stayed: averaged 22.8 points in four games. How it ended: granted release.
8. MÁLAGA, SPAIN (Unicaja-Mayoral, '92-93) "It's a bit of a resort town, on the coast. I had a ball. We always ate at Mama Luigi's, and the owner fed us until we were blue in the face." Stayed: 30 games. How it ended: granted release.
9. BARCELONA (F.C. Barcelona, '93-94) "The New York of Spain, a lot of places to shop, great
restaurants, architecture. And they got me into plantains and rice, which reminded me of home cookin'." Stayed: 25 games. How it ended: granted release.
10. LOS ANGELES (Clippers, '94-95) Made the team and became a starter in the NBA for the first time, averaging 9.3 points. "The hot spot, believe it or not, was TGI Friday's. Magic Johnson used to throw a party every Friday." Stayed: 80 games. How it ended: taken in expansion draft by Toronto.
11. TORONTO (Raptors, '95-96) "Canadians have a good disposition. But they'll eventually lose the team. Canada is hockey country." Stayed: 24 games. How it ended: traded to Philadelphia.
12. PHILADELPHIA (76ers, '96) "The 76ers were the worst team in the league," says Massenburg. "Horrible top-to-bottom. Knowing I wouldn't be there long, I spent a lot of time on South Street and at King of Prussia Mall shopping." Stayed: 30 games. How it ended: became free agent.
13. NEW JERSEY (Nets, '96-97) Got a one-year, $247,000 deal. "I lived in a condo in [Jersey] but spent my downtime in New York City, mostly at the Shark Bar," says Massenburg. "They have great Southern food: catfish, collard greens and fried chicken." Stayed: one year. How it ended: contract expired.
14. BOSTON (Celtics, '97) Got three years, $2.7 million. How it ended: traded in October before season started.
15. VANCOUVER (Grizzlies, '97-99) "Nobody was hot on Canada, mainly because of the t
\games. How it ended: traded to Rockets. 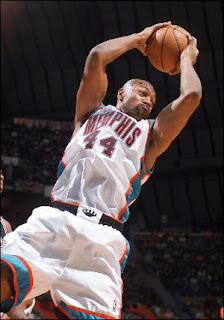 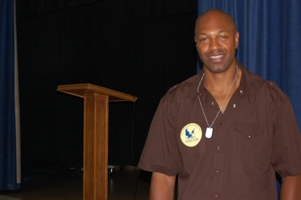 Is there really a difference between being "waived" and being "released?"  Funny how he mentioned Canada as a hockey town and figured Toronto would lose their team, even though it wound up being Vancouver.  He complains about the high taxes in Canada too.  And just admire that picture of Massenburg and Ramon Rivas getting into it.  (I liked that photo so much, I had to add it to Rivas' WTHHT too!)

So he spent 20 days with the Celtics back in 1992.  I vividly remember the game back on Saturday January 11, 1992 which Tony appeared in.  I remember it because the Celtics were in NY (where I lived) and I was actually in Boston with my 8th grade CYO team for a basketball tournament.  All my teammates were Knicks fans so it was annoying watching the Celtics lose.  But sure enough, I remember Massenburg playing.

He'd play in 7 games total for the Celtics that season and in 46 total minutes scored 10 points and grabbed 9 rebounds.  He'd end up winning a title with the Spurs in his final season, 2005.  That year's playoffs he actually appeared in 9 games for the Spurs, which I wouldn't have known without looking up.

Six weeks after winning the title, Tony injured his ankle badly. In 2007 at the age of 40, he was waived by the Wizards, which didn't allow him to break the record for most NBA teams played.

He was a tough competitor, in the mold of a Derek Strong (without as much range if I recall correctly) or Popeye Jones (he was quicker than Popeye).  Tony's lengthy NBA career was a testament to his hard work and dedication and even though he was released pretty often throughout his career, his resolve resulted in eventually securing an NBA title. 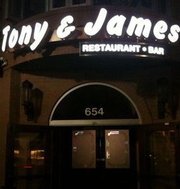 Today (just like Kevin Stacom) Tony owns "Tony & James" restaurant in Gaithersburg, MD.  Some of the reviews have been harsh to say the least.  Check out Nicole M's dissertation that begins:


I'm not sure who"Tony" or "James" are, but I think they are overzealous first time restaurant owners.  Perhaps they own others, I can't say.

Say what?!  You don't know who Tony Massenburg is?  What the hell's wrong with you Nicole?!  With all the NBA stops he's had!  Stop whining about the price of the hamburger and give some respect to Mr. Massenburg.

"James" in this case is a James Lloyd, who was a strength coach in the NBA with the Sixers.  Tony certainly crossed paths with him at some time in his journey.


Considering the other websites for our WTHHT players that have included the Pervis Ellison tribute site, the Zan Tabak Skills Camp and the Acie Earl real-estate site, this is actually a phenomenal site aesthetics-wise.  The photos page is great, so great that I had to copy the picture

What are those 3 guys so elated about?  Based on the reviews of Tony & James, I'm not sure if it's the price of a hamburger.  Although I'd definitely give it a shot if I was in the area.

But alas!  (This never-ending Tony Massenburg article just keeps on going).  In August of 2010, after only being open for 3 months, Tony and James was sold to a Parham Freiz.  With the transition in management, some employees appear to have been stiffed their pay.  Michael Stone worked as a line chef and went two pay periods without a check and before that his pay was reduced retroactively. “I really have never dealt with such unprofessional people,” he said.

Tony Massenburg, unprofessional?  Quite the contrary.  He was VERY professional in his NBA career.  The last bit of information claims that the name of the restaurant will change as Massenburg and Lloyd focus on opening restaurants in the Georgetown area of DC and Florida.

***Addendum 12/21*** A big thanks to the aforementioned Nicole for informing us that Tony is giving it another shot, this time calling it "44 Sports Bar and Grill."  44 is most certainly the number Tony wore when playing although with the C's he wore #41.  Apparently from this article, Tony is trying his new gig solo, and has given James the boot.  No word on whether line chef Michael Stone will get his compensation.