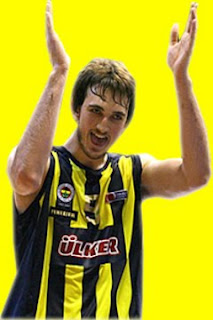 The lockout is making us NBA fans ornery. But if you are in need of a basketball fix, about 60 NBA players will be representing foreign countries at the upcoming FIBA Americas and FIBA Europe tournaments being held in Argentina and Lithuania, respectively. The tournaments begin at the end of August, and are qualifiers for the 2012 Olympics in London. The USA is not fielding a team this year since they already qualified for London by winning the 2010 FIBA World Title.

Several members of the 2010-2011 Celtics will be playing in these tournaments, including Semih Erden (Turkey), Carlos Arroyo (Puerto Rico), and Nenad Krstic (Serbia). Visit Hoops World for a complete list of all NBA players expected to participate in the FIBA events. Since the NBA is in lockout mode, which teams would you most likely root for if you decide to watch international basketball? Which do you think will make it the farthest in the tournaments? What is the over/under on Krstic throwing another chair at someone at this year's FIBA Worlds? The FIBA events can serve as a distraction from the lockout, and give us something to discuss other than planking and what not.