What the Hell Happened to...Marvin Barnes? 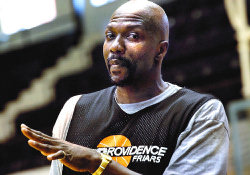 In this week's episode of What the Hell Happened To, we remember the 3rd player from the Providence College team back in the 1970s to make the Final Four, after Ernie DiGregorio and Kevin Stacom).  To say he was eccentric would be an understatement.  I'll start you off with a quote while he was playing for the Spirits of St Louis of the ABA regarding a trip to St Louis:


The flight leaves Louisville at 8 pm and is scheduled to arrive in St. Louis at 7:56 pm. Upon reading the flight itinerary he becomes confused and asks how can this be, someone breaks down the time zones and how St. Louis is an hour behind Louisville. He says that they can cancel his ticket because “I ain’t gettin’ on no time machine!”  He proceeded to rent a car for the trip.

The hilarity of this quote by Marvin Barnes, can't be underestimated.  A band today even has the name The Marvin Barnes Time Machine.  This was apparently the weird way Marvin would think.  But not only was he armed with hysterical quotes; he was blessed with a big-time basketball game. 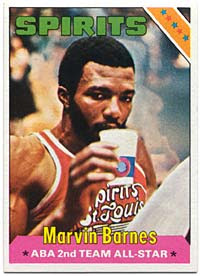 Marvin was born on 7/27 (a great number indeed) in 1952 (making his 59th birthday tomorrow) in Providence, RI.  He'd attend Central HS in Providence before staying home and going to Providence college.  Drafted by the 76ers with the second overall pick in the 74 draft, Marvin decided to sign a $2 million contract with the ABA's St Louis Spirits.  He'd win Rookie of the Year in the ABA averaging 24 and 15.7.  But Marvin's reckless ways were troubling. If you have issues with drugs there are many quality places that you can find a clinic or rehab center to receive help.


"I was young, wild and had tons of money," Barnes said.  "I'd be late for practices, miss team flights and did what I pleased.  Because of the numbers I put up management never really got too upset.  If they didn't care what I do, I don't care what I do.  My motto was live hard and die young.  I didn't expect to be around long, figured I'd die in a shootout where I grew up.  I'd live for the moment so I'd drink, use marijuana and snort coke when I could.  The coke intensified everything.  When I got that rush, I thought the coke was making me a better ballplayer. 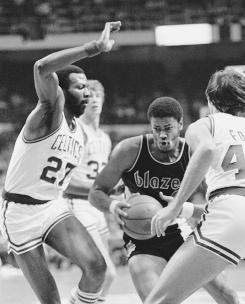 Because he put up big numbers in the ABA, when the league merged with the NBA in 1976, Barnes would be taken by the Pistons in the first round.  Marvin would serve a 6 month prison sentence for attempting to carry a gun onto the plane (wasn't this guy only suspended a few games?) and when he was released, attempted to renegotiate his contract with the Pistons.  Detroit couldn't be bothered and shipped Marvin to Buffalo.  After one season with the Braves, Marvin would arrive in Boston via a trade.

His Celtic teammate remember him fondly.  ML Carr said "Like Bird and Magic, Marvin had all the skills."  Cedric Maxwell added "People in Boston never forgot how great he was at Providence.  When he came to the Celtics, everyone was rooting for him."

Because of his strong New England ties, a reunion in Boston would either help Marvin focus or hurt him with familiar faces of the wrong crowd.  It became the latter.  Marvin would only play 38 games for the Celtics during the 1979 season.  As his skills diminished his drug addiction increased.


I'd come home from a game and there would be a mountain of coke waiting for me on the dining room table.  I didn't even know half the people who came to my home.  Didn't matter as long as that coke was there.

I remember (while playing for the Celtics) I had just come out of the game and was sitting at the end of the bench.  Before  I had come out for warmups, I had stashed a bag of coke into my jacket pocket.  Now I put a towel over my head and began snorting the stuff.  I think Nate Archibald or Don Chaney saw what I was doing because when I looked up, I saw them both scrambling to sit as far away from me as they could.

Several nights later the Celtics released Barnes when he failed to show up for a game.  He'd get one more opportunity wit the Clippers the following season but was waived after just 20 games.

Marvin's life began to fall apart.  He had made $4 million in his playing career and spent it all.  He was homeless, and living on the streets in Boston, Detroit, St Louis, in an out of jail, always looking to score more drugs.

Finally after another failed attempt at a comeback playing overseas, Marvin came back and checked himself into the Houston rehab center, that was run by John Lucas.  He'd remain sober there for a couple of years before slipping up, and finding himself back in jail for his role in delivering drugs.  He was supposed to serve 7 years in Lynaugh Prison in Texas but only wound up serving 33 months.


It was definitely hard time, says Barnes.  The guards would let inmates fight to the death.  My personal turning point came when I got in a fight with another inmate and started pounding his head into the cement floor.  He was bleeding and unconscious when I just stopped because I felt I was becoming an animal.  Right there on the spot I decided, no more craziness.  No more drugs, no more prison.

[Of course if Dave Popson was his prison guard, things may have been easier for Marvin, since they have the WTHHT connection.]

This time Marvin wouldn't renege on his word.  He finished his degree requirements in general education from Providence College while completing his prison sentence.  A couple years back, Providence College retired Marvin's number (along with Ernie D).  Here was a promo they had: 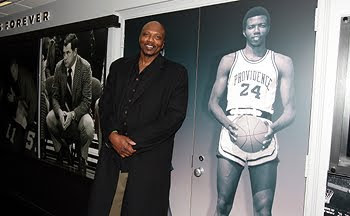 Today Marvin has gotten his life in order and heads up The Rebound Foundation in Warwick, Rhode Island.  This involves counseling inner-city youth.  As Marvin himself tells it:


I really get on them to do all the right things in school and in their personal lives.  I tell them my prison stories, and I let them know that if they think they can handle prison time, they'd better damn well think again.  I also bring in judges, ex-prisoners, and ex-gang members to talk to them about the consequences of being a street thug.

"Potential" is a word that's tossed out around there a lot.  Marvin seems to have been one of the most talented players to live and never reached his basketball potential.  Kudos to him for getting his life in order and being able to positively impact the potential of future kids.

***Addendum*** Marvin passed away on September 8th 2014. Celticslife wishes his family our condolences.