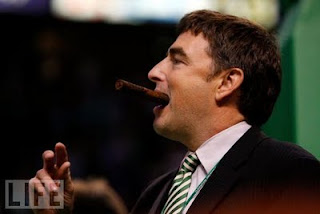 According to Yahoo Sports' Adrian Wojnarowski, Celtics part owner Wyc Grousbeck is one of many owners not only prepared but also willing to miss a season to get the deal they want.

These fights are always about one thing: pain tolerance.

The owners believe they have more tolerance than the players, believe that pain comes with missed checks in November and December and perhaps, finally, a complete cave with time to rush a shortened 50-game regular season and playoffs. Back in the labor talks of 2005, Celtics owner Wyc Grousbeck would say over and over in the negotiating sessions: The lockout is an investment.

Grousbeck smartened up, kept that thought to himself, but rest assured the mindset hasn’t changed. He’s one of the owners believed to be willing to lose the next season, along with Phoenix’s Robert Sarver. The list goes on and on. The NBA goes away for the summer now, and nothing will get serious again until September when Stern will have to start cancelling games in the 2011-12 season.

Woj categorizes the Celtics, Suns and Cavaliers as "hardliners" for a hard salary cap, with teams like LA and Miami being a little looser (Gee, I wonder why?).

Anyway, no big surprise here. We've watched pretty much the same thing unfold in the NFL over the past several months. Only difference is the NBA actually has real problems, teams are losing money. The NFL just cant agree on how to split the billions of dollars they're making.

In the NFL I sided 100% with the players. they make less than NBA and MLB players and the owners were asking them to fork over more money for seemingly no reason.

With this lockout, I go the other way. The system is obviously flawed and while the owners screw themselves over with handing out stupid contracts year after year, I have to side with them on this one.

A year ago, when both of these lockouts were looming (NFL and NBA) most experts were much less optimistic about the NBA than the NFL. Seeing as how long the NFL lockout has dragged on, I'd atleast expect some games to be missed in the NBA.