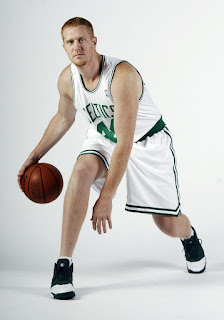 Fan favorite and Celtics iconic member of the ubuntu years is likely taking his talents to Europe:


"For me personally, if in the next 15 days it's still kind of like it is now, I'm just going to Europe and play," Scalabrine said in a phone interview. "The thing about that is you have to commit for the whole year and you have no out clauses whatsoever. I support the players and the union and want to see the (NBA) game stay great. But at the end of the day, with two years or so left of playing basketball, I'm not interested in watching billionaires fight. I just like the game too much. I like the camaraderie. I like to play. So why not do it in a great city in Europe and educate my family?"

Fair enough, Scal. I think it will be nice for you in Europe and that you will enjoy ending your career here.

I guess he makes his point when he indicates he doesn't want to watch billionaires fight, but it is also true that he wasn't exactly underpaid while he was in the NBA either. Just saying.

In any case, good luck Scal.  We missed you last season. To me, ubuntu wasn't the same without you in a Celtics uniform.

By the way, if Scalabrine comes to play in Poland I will certainly try and get an exclusive interview for CelticsLife ;)