Carlos Arroyo, next one to leave? 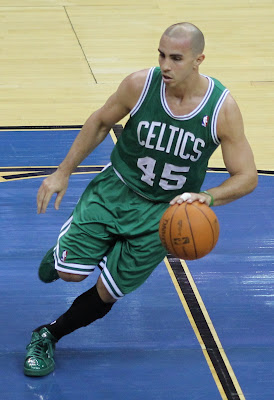 After Nenad Kristic's depart for weeks ago, it may be the turn for another Celtics free agent to leave for . According to some reports, Arroyo is in contacts with an Italian squad:

Yesterday it was learned that the Italian Club Pallacanestro Cantu seems to have a great interest in the Puerto Rican point guard who was released on 30 June.
The player's agent, Ricardo Carrillo said Arroyo is preparing to return to the in the coming days but that he did not mention anything about the possibility of playing in

"He said he is making arrangements to come here. But do not say anything on a team. I am not surprised by what may happen because the NBA lockout has made many players contemplate as an option, "he said.

Yesterday it spread like wildfire the interest for Arroyo by Cantu, a team that has a current league record of 22-8 and is in second place in the Italian League.

I wouldn't be shocked to see Arroyo sign for Cantú or another European team soon. After all his chances of returning to the Celtics are slim and his stock is at his lowest. Furthermore, he already played in Europe before so he has some experience and he doesn't need any time to adapt to life here.

p.s. The quote is translated from the original Spanish by me. Also hat tip for the site sportando.net for mentioning the rumor in Italy yesterday in twitter