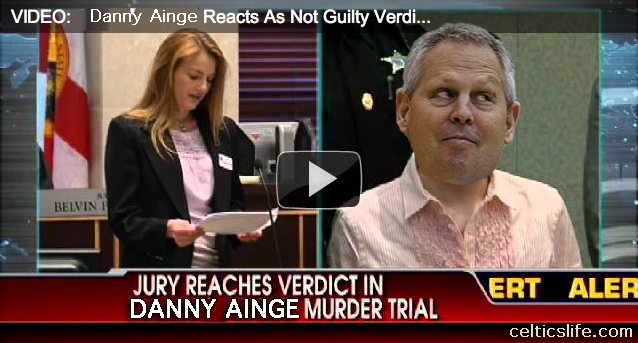 In a shocker, an Orlando jury (Don't ask me why the trial was in Orlando. I think it was to make it easier for Doc Rivers.) has found Danny Ainge not guilty of murdering Ubuntu and the 2010/2011 Celtics. Despite a preponderance of evidence that Ainge was to blame for the closing of the Big 3 window in Boston, the jury felt there was enough reasonable doubt to let him walk. Ainge was found guilty of lesser charges including lying to the media. If you recall Ainge came up with some crazy stories to lead the media astray including, but not limited to: Jeff Green is a better defender than Kendrick Perkins and Jeff Green was the most efficient Celtic on offense in the playoffs. The prosecution was able using basic stats to disprove these lies and in fact produced butterfingers DNA from Jeff Green's hands.
Regarding the more serious charges, the prosecution claimed all Doc Rivers work instilling Ubuntu in the Celtics was destroyed when Ainge continued to show that loyalty was only a one way street throwing Leon Powe to the curb after he sacrificed millions to play on a bum knee for the Celtics in the 2009 playoffs, then firing Clifford Ray after it was too late for him to catch on with another team due to an injury he suffered due to the Celtics negligence.
The prosecution continued to produce more evidence including Ainge not pursuing Tony Allen hard enough in the summer of 2010 and letting him go for peanuts. But the most damning evidence was the tailspin the Celtics went on after Danny traded one third of the team including starting center Kendrick Perkins right at the trade deadline. Doc had always preached that the Fantastic 5 had never lost a playoff series and if they stayed healthy and together they would be champions. And then in a moment they were split up, so that Danny could obtain a backup small forward for their all-star Paul Pierce.


Evidently the jury bought Danny's lawyer's case that as a former player and not a medical expert there was no way for Danny to know that 39 year old, 400 pound centers with bad feet aren't a safe bet to return from injury, so it simply was not Danny's fault they were left with only the perpetually injured Jermaine O'Neal at center come playoff time.
Reaction around America is of utter disbelief. Americans are now calling the OJ trial, the Casey Anthony trial and this Danny trial the Big 3 of United States Justice System failures. Nancy Grace is beside herself. Celtics Life is sending our ace reporter Rondo Burgundy down to Florida in an attempt to interview a few jurors. We will keep you posted of any new developments.
About Afternoon Delight: Every day at 3 PM Eastern time, Celticslife.com posts an original humorous creation for your delight. Check back tomorrow for more, or view past Afternoon Delight postings.