What the Hell Happened to...Bud Olsen? 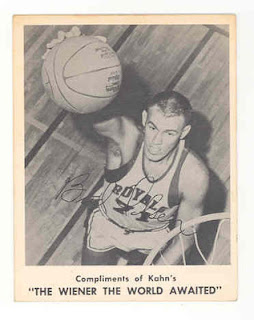 This week in What the Hell Happened To, we go back to the 1960s and remember 6'8 forward-center, Bud Olsen.

Bud played his college ball at the University of Louisville and was drafted by the Cincinnati Royals in the second round of the 1962 draft.  He was a teammate of Oscar Robertson with the Royals, and the Big O has a couple of fond memories of him:


''I was told that when you go to the (Madison Square) Garden, and a kid says he wants to carry your bag, don't let him,'' he said. ''And I didn't. A few years later, when I was playing for the Royals, Bud Olsen, a teammate of mine, gave his bag to a kid. The kid disappeared with it. Olsen couldn't play that night. No uniform.''

Looks like Bud didn't know the culture of NY.  But Bud also seemed to be like the Hawks bench during the Larry Bird 60 point game on the regular.  Robertson said:

Olsen would “sit on the bench and watch my moves and punch the guy next to him, ‘You see that? You see that?’”

After three years in Cincinnati, Olsen was traded to the San Francisco Warriors for Connie Dierking and Art Heyman.  After two seasons with the Warriors Bud would be drafted in consecutive Expansion Drafts, first by the Sonics in 1967 and then by the Bucks from the Sonics in 1968.  Bud would never suit up for the Bucks as they waived him.  That's when the Celtics entered the picture, signing Bud in September of 1968.

His time in Boston was short, like Reggie Hanson-short.  He played just 7 games and averaged 2 points and 2 rebounds in 6 minutes a game.  He'd be released in December of that year as Red wanted to sign Jim Barnes.

The Celts would go on to win the championship that season and Bud would bide his time with the Pistons.  After that season he played one more the following year for Kentucky in the ABA before calling it quits.

It appears Bud didn't get a championship ring, unlike Togo Palazzi.  I think Bud and Brandon Wallace should try to get this situation straightened out.

Today Bud lives 10 minutes from Louisville, where he enjoyed his college success.  He most recently worked in Sales at Schardein Mechanical (another mechanical contractor?  I thought only the A-Train was involved in that?!)


This is also the second WTHHT we showcase an autograph from a former player.  Last time it was Zaid Abdul-Aziz to Sheila and this time it's Bud Olsen to a Jarrett:

Unfortunately this is only the second WTHHT article that we have no recent picture of the person (in addition to Steve Kuberski).  Maybe someone in the Louisville area can snap a photo of Bud for us?!

In closing I must admit: I didn't work too particularly hard on this article to find out information since a wonderful summary from just a few weeks ago was written on Bud on Supersonicsoul, a pretty cool site.  So for any more info on Bud Olsen, I point you there.