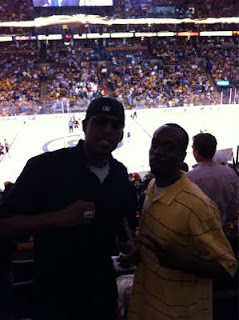 The Bruins have taken the city by storm over the past couple months, and they've gotten support from some of Boston's star athletes from other sports. Paul Pierce has definitely been one of them.

Last night Pierce tweeted, "Congratulations to The Boston Bruins Stanley Cup Champions 2011 is there a better sport town than the bean I think not...My 13yrs in Boston 2world series 1 NBA championship 3 super bowls know 1 Stanley cup what a place to b a sports fan...U kno What it is Black&Yellow Black&Yellow Black&Yellow"

Pierce also tweeted a lopsided video of him at Game 6. Maybe you'll see him at the parade on Saturday. Who knows?