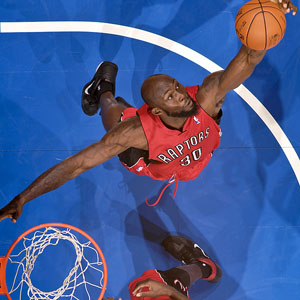 It's unavoidable. I can already predict the look in your face when you open your favorite Celtics site and you see Reggie Evans picture on it. Evans a Green Target? I bet you will take a longer sip to your morning coffee to wake up.

Ready? Yes, you saw it right. I am going to talk about Reggie Evans as a possibility in green. I will give you two main reasons why the Celtics should consider it: Evans is tough as nails and he can rebound the ball. But sure you heard this before when we signed future WTHHT hero Troy Murphy so I can feel your disbelief there. When we signed Troy many thought we should have better inked Leon Powe. Evans is more in the mold of Powe but with even more rebounding prowess and displays a crazier and more disturbing attitude on the court. He is like a meaner Powe and a poor man's Dennis Rodman. If you are thinking Artest, then I guess we won't avoid talking about Ron Ron either. The difference is that Evans doesn't believe he is someone he is not. He knows he can only do two things on the court so he doesn't even try to do the rest. That is why I would rather label him as a mini-Rodman rather than a pseudo-Artest.

Listen, we all want flashy stars and athletic freaks for our team. We want Tyson Chandler or Marc Gasol right now and it is fair to hope for that, and we will have our chances to get those players. In the meantime, I will just try to focus on something we missed since big Perk left town: toughness. Evans plays hard, wears his heart on his sleeve and would give us something we always have problems with: rebounding. He knows his role and won't get out of it, so he would buy into the philosophy of this team.

The Celtics would get their instigator, another player the opposing teams would hate. He averaged 11.5 rebounds in 26 minutes with the Raptors last year, wouldn't you like some tough rebounder like this for your team?

How the Celtics could get him:

He will be fully unrestricted in three weeks, meaning he can sign with any team he wants. According to some reports, he may not be in Toronto's plans for the future so he will probably look elsewhere. At 31 he may be already thinking about joining some contender to try and get a ring, and Boston would be an ideal environment for him. I don't believe he would be asking for much money, so it would be totally possible that we wouldn't need to touch the MLE money to get him. I ignore if he would sign for a minimum since what he brings to the table is clearly higher than that contract but maybe he would like to try here for a year and then explore his options (with a ring in his collection everything looks better, right James Posey?). In case he wouldn't settle for that money I guess we could offer him the LLE if it's still a valid option for NBA teams after the new CBA deal is designed.

Well, his flaws are quite evident. He adds absolutely nothing to the offensive schemes of things, except for a couple baskets here and there after an offensive rebound. His free throw shooting is atrocious and would grant Doc Rivers a full new set of painkillers for his headaches. Also, he is not in the top list of basketball IQ in the league. You may want to check what he did to Chris Kaman once, and he even made Grant Hill mad at one point, which would make you doubt if he is a good fit for any team. Finally, he hasn't been very healthy lately so that can be a concern for a team that is quite sensitive in this particular subject.

So let's face this possibility. He would be a low risk option that could makes us tougher inside. He would sign for cheap and would be a piece in the puzzle with the current core of players remaining in Boston for one more year.

What do you think? Should the Celtics sign Reggie Evans?