What the Hell Happened to...John Bach? 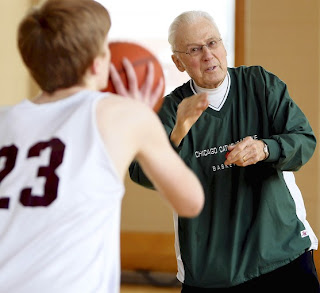 Today in What the Hell Happened To we go all the way back to the 1948-49 season to remember John Bach.  Yep, that same John Bach who patrolled the sidelines under Whistling Phil during his Chicago days.  When Bach signed a contract worth $5,000 to play for the Celtics in 1948, he figured he'd give basketball a try for a couple of years and then enter the business world.  "But basketball never managed to find a way to get rid of me" Bach says.

John attended Fordham University (making him one of their more famous alumni, right there with Denzel and Smush).   He'd become a naval officer in WWII, serving in Okinawa.

When he got to the Celtics, John wore #17, long before John Havlicek would wear it and be retired.  It was back in the days of John Ezersky and the BAA.  Bach played in 34 games that season, coming off the bench, shooting 29% from the field and 68% from the foul line.  He averaged 3.5 ppg. 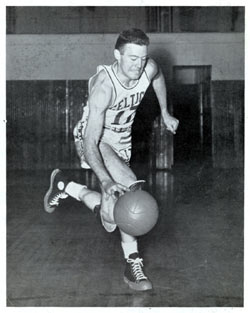 John would be cut the next season in Boston, losing out on the final roster spot to Joe Mullaney.  John would go onto play for Hartford in the Eastern Basketball League:

We got $100 a game and usually played between 3 and 4 games a week.  The competition was excellent.  One team, the NY Rens, were an all-black team who could've been excellent NBA players had it not been for the league's racial discrimination.

John makes a good point about the early days of the NBA.  That is, how many of those records should be taken seriously until integration took place?  Part of me feels everything prior to Chuck Cooper playing for the Celtics should be thrown out the window.  That includes the Flakers 1949 and 1950 titles.  Seriously how does the 1949 title count towards their 16 NBA championships, when it was called the BAA?

After that season John's playing career came to and end.  He was offered the head coaching job at Fordham and decided to take it.  John would leave Fordham in 1967 to take an offer at Penn State, where he was offered more money to support his wife and five children.  He'd remain at Penn State until 1977 when he asked for a leave of absence.  All the recruiting in college had burnt him out.  John had his pilot's license and began flying planes for the Piper Corporation. 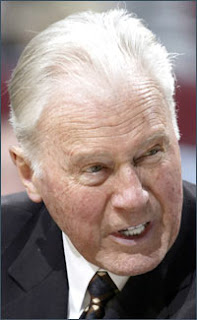 That was until the Golden State Warriors general manager and legendary big-man coach Pete Newell asked Bach to become the top assistant coach in 1979.

Pete and Al (Attles, head coach) were both people I knew and respected.  I had only been away from the game for a year, but I really missed coaching.  Now I'd be back- and on the pro level, something I hadn't done yet.  It was the challenge I was looking for.


John would get his break to become head coach for the Warriors at the start of the 1984 campaign, when Attles accepted a front office position.  But those Warrior teams were putrid and John would be dismissed in 1986.  He figured he'd be better served in an assistant's role rather than wait for a head-coaching vacancy to open-up, so he joined on with Whistling Phil's staff and was a part of the Bulls teams that won the titles in 1991, 92 and 93.  In 1994 Bach would head to Charlotte to coach, where he'd stay for 2 years, then it was on to Detroit for 2 and Washington for 3, including coaching MJ in his final return. He was planning on retiring but was coerced back into an assistant's roll on Scott Skiles Bulls teams up until 2006. 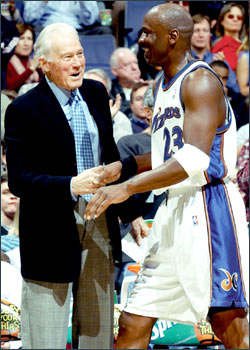 He may have left the NBA but amazingly enough, even today, John is still involved with basketball at the age of 86!  He volunteers with the sophomore basketball program at St. Ignatius High School in Chicago.  He's also an avid painter, even submitting 32 of his water-colors to be put on display at the Sevan Gallery in Skokie, IL.