Wolves GM Kahn Implies the Fix was in on NBA Lottery 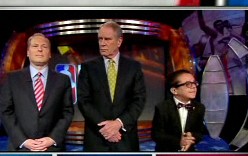 
Wolves general manager David Kahn said he knew Minnesota was "dead" when it got down to the final three of himself, Utah executive Kevin O'Connor and Nick Gilbert.

"This league has a habit, and I am just going to say habit, of producing some pretty incredible story lines," Kahn said. "Last year it was Abe Pollin's widow and this year it was a 14-year-old boy and the only thing we have in common is we have both been bar mitzvahed. We were done. I told Kevin: 'We're toast.' This is not happening for us and I was right."

David Stern also has a "habit" of fining people when they point out allege the NBA of being crooked. So how much does Kahn get fined?

I still feel the most fixed lottery (even more than the Ewing lottery) was 2007 when somehow the 3 teams with the worst records: the Grizzlies, the Celtics, and the Bucks who all tanked like nobody's business jockeying to get either Oden or Durant, all were bumped out of the top 3 spots and 3 teams that didn't tank: the Blazers, Sonics, and Hawks took their place. You've noticed that since 2007 there hasn't been a tanking issue in the NBA anymore right? Stern sent the message that Spring that tanking would be punished severely.

Kahn you better shut your mouth if you ever want a #1 pick (You know the Wolves will still be in the lottery for several more years). With Isiah out of the league and with the Chris Wallace built Grizzlies surprising postseason run, Kahn is now 100% in the driver's seat as the most incompetent NBA GM.