What the Hell Happened to...Brandon Hunter? 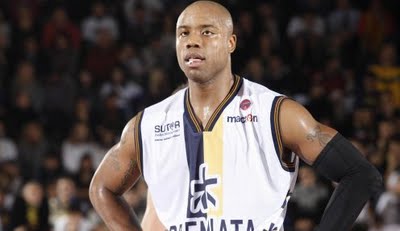 This week in What the Hell Happened To, we go back very recently to remember Brandon Hunter.  Hunter was the 56th overall pick in the 2003 draft by the Celtics out of Ohio University and he'd wind up making the team that fall in training camp.

He'd wear #56, and would appear in 36 games that "transition" year of when Danny Ainge officially took over running the team from the Buffoon.  Brandon actually played in 3 of the 4 games in that year's playoff debacle vs the Pacers.  [Tangent time: looking back on those games, that really was a lowpoint as being a Celtics fan.  Just 2 seasons removed from that miraculous run to the Eastern Conference Finals, they were totally annihilated by the Pacers, and some of the final scores didn't look as bad as the games.  I remember seeing that ass-whooping and thinking that the Celtics were years away from being contenders.  Thankfully it'd only take them 4 years to win a title!] 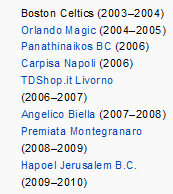 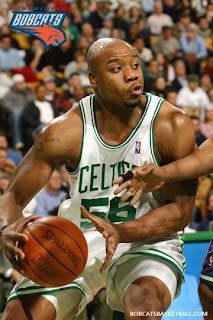 Just like Jerome Moiso, I figured it'd be easier to give an image snapshot of Brandon's basketball odyssey (not that I disliked Brandon nearly as much as Moiso; I actually liked Brandon, and if Moiso played with half-the-heart of Hunter he may have lasted longer in the league):
I remember watching Brandon play and Tommy being high on him (not that Tommy has done this before for a mediocre Celtic).  Brandon definitely had a tenacity to him; he just wasn't particularly skilled and less athletic (and probably shorter) than Glen Davis.

Today Brandon plays for Ventspils Klub in Latvia in the LBL.  As you can see from their site, they even attempted translating Brandon's name into Latvian as "Brendons Hanters."  So I suppose I could have titled this article "What the Hell Happened to...Brendons Hanters?"  My question is are we allowed to do the same for Andris Biedrins, he of Latvian Fame?  If so I say we name him "Andre Birdrych."  Andre, as we know, is an American name.  And Birdrych sort of sounds like the old baseball player Mark Fidrych, whose nickname was "The Bird."  Plus Biedrins sort of looks like a bird.