"The Trade" was originally for Harden, not Green 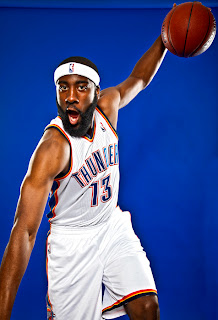 In Bill Simmons's latest podcast he had Sean Grande on as his guest and they drop an interesting piece of news that I hadn't heard up to this point. Turns out the original Perkins to the Thunder trade revolved around James Harden and not Jeff Green. The story goes that Presti changed his mind and convinced Danny to accept Jeff Green instead. Simmons speculates that Danny had simply decided that he wanted to move Perk, so he agreed to the restructured deal for Green.
Harden, while no stud just yet, would have been an interesting addition. He's only 21 and still on his rookie contract. He has a legitimate position and can create for himself. This year for OKC, Harden scored more and had more assists per 36 minutes than Green. Green, even though he played down low, only had 1 more rebound per 36. Of course Harden is a few years younger, so you'd expect his ceiling to be higher as well. Who knows what type of player Harden will become, but this is definitely an interesting sub plot to "The Trade."

Simmons and Grande both seem to think that Presti made the wise move holding on to Harden. Interestingly enough this is not the first time that Presti and Ainge made a trade that could have been much different. The original Ray Allen trade had Presti asking for Rondo instead of Delonte. Ainge said he'd make the switch as long as Presti included Robert Swift. Presti declined and Ainge dodged a bullet.

Now by no means am I saying that Harden will become Joe Johnson and Jeff Green will be out of the league like Kedrick Brown. Green is already infinitely better than Brown was and Harden, while still very young, has a ways to go before anyone thinks of him as an all-star. That said, I do believe that James Harden is a better prospect and building block than Jeff Green is. I don't think either would have been worth sacrificing this season for, but that's my personal opinion. But hypothetically moving forward would you rather have Jeff Green or James Harden?