The Key Moment when the Bulls Lost to the Heat 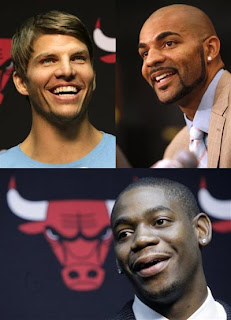 I mentioned underneath yesterday's Game 5 highlights that I'd be writing this column today. The Bulls ended this regular season as the best team in basketball record wise. Derrick Rose with his MVP season and Coach Thibs deserved a lot of credit for this. The playoffs are about stars and the Heat essentially became the top seed when they signed superstars Wade, LeBron, and Bosh last Summer. Just as in 2000 when the Bulls had a ton of cap space, but Duncan, Grant Hill, and T-Mac all turned them down, the Big 3 this past Summer all passed on joining Reinsdorf's Bulls. And just like in 2000 when even lesser "stars" like Jalen Rose and Tim Thomas also passed on the Bulls max offers, this past Summer the Bulls weren't able to sign even an Amar'e, Joe Johnson or Rudy Gay. You put even just Johnson and Amar'e on the Bulls and they beat the Heat handily. The Bulls completely struck out (again) in free agency, with Boozer playing the Ron Mercer role 10 years later. 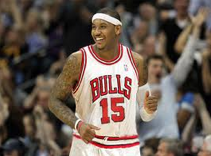 So the Bulls ended up with the oft injured, overrated, no defense playing Carlos Boozer, Ronnie "I couldn't throw the ball in the ocean if I was drowning" Brewer and  Kyle "I Look like Ashton Kutcher and get Punk'd on defense no matter who I'm guarding" Korver as their big 3 free agent additions. They planned for this Summer for a couple years. They let Gordon go and they traded Salmons and Hinrich with the intent of not failing again in the big Free Agent Summer of 2010. Well they did.

The thing is they got offered a mulligan. Carmelo Anthony wanted out of Denver last Summer and the only team that he was willing to go to that the Nuggets were willing to trade him to was the Bulls. The Nuggets wanted Joakim Noah. Yes Noah is a nice energy guy and defensive center. He's no Carmelo Anthony though. The Bulls wilted against the Heat because Rose was the only superstar scorer (really the only scorer). With 'Melo things would have been a different story. You could replace Noah with an Asik or Kurt Thomas. You can't replace 'Melo with a Kyle Korver or Ronnie Brewer.

So in the end it wasn't Coach Thibs or Derrick Rose that failed to deliver vs the "hollywood as hell" Heat team. It was Reinsdorf, Paxson and Foreman that struck out on all of the top free agents last Summer and then blew the 'Melo gift that was being thrown their way. Michael Jordan couldn't even win with the supporting cast that Rose had.