Are the Miami Heat cheaters? 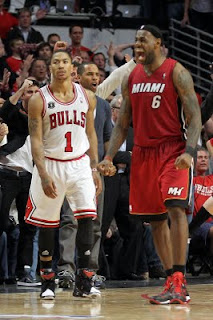 The Miami Heat have the support of no one. Except for the fans down on South Beach that have been following the team for the past couple months, no one in America wants Miami to win it all.

It all really stems from LeBron James. When Chris Bosh and Dwyane Wade announced they were going to sign with the Heat last summer, no one really cared. James had his "The Decision" television special and drove a stake through the heart of Cleveland by announcing on national TV that he was leaving, then there was this whole debacle.

I get it if you hate the Heat because of the latter video, but don't tell me it's because of "The Decision" and LeBron's betrayal of Cleveland. Nobody cares about Cleveland. LeBron was a free-agent, he could go wherever he liked and he had that right. Unless you're a Cavaliers fan, LeBron's decision to leave that boring city should not upset you.

Lastly, people harp on LeBron for being an ego-maniac for having a television show about where he'll sign. Come on. Every superstar athlete is an arrogant egomaniac and you'd be lying to yourself if you thought otherwise.

There's only one major reason why fans from Boston and all around the country hate the team that was formed in Miami over the summer and it has nothing to do with hating James personally or feeling bad for Cleveland.

In his latest BS report podcast, Bill Simmons had Ric Bucher on as a guest and Simmons described LeBron's decision to join the Heat in a way that sums up the reason why I don't like the Heat and the actual reason why I think America is so against them.

Simmons basically says it's like if you were playing pick up basketball with your friends and LeBron was on one team and Wade was on the other and LeBron just kept losing. So eventually LeBron says well why don't me and Wade be on the same team and everyone's like, 'well that's not fair'.

That's exactly it. People don't like LeBron's decision because it's not fair. During the season all of the NBA experts, bloggers and fans were trying to say the Heat were a flawed team. That it's not enough to have two of the top three players in the league, that they need a real team like the Celtics or Bulls.

Well, guess what? The Heat beat both of those teams in five and they did it with pretty much two players (yeah, I basically don't count Bosh).

Two players, when they are as good as LeBron and Wade, are all you need in this league. Why? Because you only play five players at a time! It's basketball. The Heat's top two are way above the next team's top one.

In football, let's say you build a team with a big three of Peyton Manning, Larry Fitzgerald and Ray Lewis. That team's not guaranteed to win a title. There's so many other players that figure into that sport. In baseball, you have nine hitters. Even if you had Albert Pujols, Alex Rodriguez and Ichiro Suzuki on the same team you're not guaranteed to win a title. In basketball you are.

I've been rooting for a Mavericks - Heat finals throughout the entire playoffs (that is, if the Celtics couldn't advance). Aside from the great redemption and revenge story for Dallas, I think this match up is the perfect test of two extremely different basketball philosophies. The Mavericks have a star player in Dirk, but they succeed on team work and excellent ball movement. They have a great cast of role players (Terry, Barea, Peja) to surround Dirk and Kidd. They're not the most talented team in the world but they play the game right, as a team.

The Heat on the other hand have two players that could very likely be the best two in the entire league. That's pretty much all there is to it. Talent versus Team.

In a way it was cheating when the Heat banded together like they did. That's why America hates them. Not because they care about Cleveland but because they care about their own teams. The window for anyone but Miami to win a championship is closing. If Miami wins this year? With the crap team they have around them? With the fact looming that this team will only get better as Pat Riley adds better role players? Look out.

Like Simmons said, if you were playing pickup and two of your friends were far better athletes than anyone else. Obviously you would split them on different teams, it's only fair. Then, if they decided to team up and just beat the crap out of everyone else and celebrate and be extremely arrogant about it you'd be pissed. That's whats happening with the Miami Heat. That's why everyone hates them. They cheated.