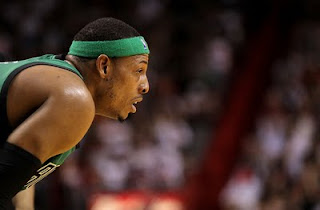 Another game with seeding on the line, and another disappointing performance.

The Celtics jumped out to an 11-2 lead early on in the first, but that was the best they looked all day. The Heat turned that nine point deficit into a 10 point lead in the second quarter and never looked back from there -- rebounding Boston 24-9 in the first half. The Celtics were outrebounded 42-26 for the game.

The Heat's big three all reached double figures. LeBron James had 27 points, shooting 11-of-19 from the field. Dwyane Wade had struggled against Boston this season but that wasn't the case in this game. He had 14 points and six assists and will probably make it to the highlight reel with his block on Ray Allen's easy fast break layup. Chris Bosh added 13 for Miami.

Other than the Spurs game, the post-trade incarnation of the Celtics has looked outmatched in games against potential playoff foes. It's easy to say they turned it on last year but that was a bit different. Doc rested the big three intentionally, it was a deliberate post-Christmas slide. That's not the case this year, these losses aren't on purpose.

In order to take the second seed, the Celtics need wins against Washington and New York and they need Miami to drop at least one game.