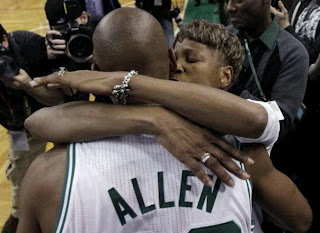 I think we can all agree that seeing Ray Allen break such a tremendous record as a Celtic at home against the Lakers with Reggie Miller court side was a basketball moment that Celtics will be part of the magical franchise history forever. Congrats to Ray and his family, now back to business at hand.

Besides the crowd being juiced up because it is the Lakers and because of Ray's new record the Celtics got a tremendous life from the bench play of Von Wafer. Just when I was nervous about the depth, Wafer steps up and provides a spark. I always thought of him as a perimeter gunner, but he goes to the rim with a certain anger and is definitely building some confidence as he is quickly becoming a key reserve for the coming weeks. In addition Nate Robinson left the court with a bruised knee and will be re-evaluated at half-time, which means it is Rondo for the long haul at the point with Allen, Wafer and Pierce sharing the 2 and 3 minutes the rest of the way. It's never easy as the lead has gone from 15 down to 7.... make that 5 after the Fisher pull up.

Thursday night on TNT, Lakers at Celtics, Ray Allen two three's away from passing Reggie Miller, who is court side along with Steve Kerr and the maestro Marv Albert. But as the game begins I am confused by the Lakers yellow and the 1940's Celtics white throwback's. While I am digging the green stripe on the short I am just not a fan of the change tonight. What I am really concerned about is the bench situation. When you have a match-up like this you want the game more then, well. lets just say the game in Charlotte the other night and the starters are going to have to play big minutes. Ray already has knocked down two jumpers as has Gasol, the crowd is rowdy and my dinner just got here. Ray rims out a three and the crowd wants it!!! Lets go Ray!!!

RAY JUST TIED THE RECORD AND DRILLED ANOTHER 2. HERE WE GO!

The Coach
As a former high school coach and educator I have always had a passion to create whether it be with a camera or the written word. From writing specialty pieces and reviews to now making my own films I love producing new content.
Newer
Older