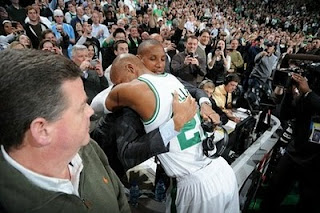 Ray Allen took his place as the NBA's three-point king Thursday night, breaking Reggie Miller's 3-point record by draining his 2,561st shot from beyond the arch. Yet, it was the Lakers who came away with the victory.

It was Kobe Bryant who led his visiting Lakers to a win, totaling 23 points -- including 12 in the third quarter -- to beat Boston 92-86.

Allen was determined to get his 3-point record out of the way early -- attempting five shots from beyond the arch in the first quarter. Two of them went in, and that's all he needed.

With just over 4:14 to go in the first quarter, Ray Allen sunk the record-tying shot off a Garnett feed. A little over two and a half minutes later, Allen drained number 2,561 on a fast break caused by a Von Wafer steal. After acknowledging the screaming crowd, Ray went right over to Reggie Miller -- who was broadcasting the game for TNT -- and gave him a hug.

Ray's record breaking three didn't help them on the glass, however. The Celtics were beat up on the boards, falling behind 47-36 in rebounding and were outscored 50-32 in the paint. The Lakers shot 47.9 percent in the game, and the Celtics made a mere 13/43 shots in the second half as Los Angeles overcame a double-digit deficit to beat the C's in the Garden.


Already short on healthy bodies, the Celtics hurt themselves with fouls. Von Wafer (5), Ray Allen(4), Pierce (4) and Perkins (5) were all in foul trouble.

double double of his own, 12 points and 10 assists. Perkins added 12 points and nine rebounds while Pierce chipped in 15 points on 6-of-15 shooting. Ray Allen led Celtics scorers with 20 points, and was 3-of-8 from beyond the arch.

In the second quarter, Boston built a lead as high as 15 points in what looked had the makings of a blow out. However, a 10-0 run by the Lakers dwindled the Celtic lead to as little as five and they ended the half trailing by only eight, 53-45.

The Lakers came out of half-time by building on their momentum from the second quarter, taking a 55-53 lead just a little over a minute in. Kobe Bryant, after scoring only three points in the first half, scored a total of 12 in the third to help the Lakers stave off Boston. The two rivals went on to exchange leads over the quarter, ending with Los Angeles holding onto a 72-68 lead -- having outscored the Celtics 27-15 in the third frame.

The Lakers jumped out to a nine point lead in the fourth, their largest of the night. It was a deficit the Celtics weren't able to overcome. Boston had cut it to six with a minute and a half left, but a Kobe Bryant jump shot with 48 seconds to go sealed the Celtics' fate as the Lakers won 92-86.

Boston falls to 38-14 and next face the Miami Heat on Sunday, February 13th for what is likely to be sole possession of the top seed in the East.