Comments From the Other Side - Nets 2/16

I feel for the Nets fans.  Even during our 18 game losing streak a few years back, I expected every game to be a win.  I just can't imagine expecting a loss going into every game.   They are so down on their players - some even wishing a season ending injury on one.  Even though the Celtics ended up with a huge free throw advantage, mainly because they were aggressive and the Nets weren't, I thought the refs were terrible in this game.  Enjoy this edition of Comments from the Other Side...

Nets will lose, but will put up a good fight

Crazy prediction: Nets win this game (no I'm not drunk)

Yes I know weird, I usually like Celtic vs Nets games even though Nets lose, just something about them

I only like them when many Celtics are injured

Game will be a loss anyway lol, no need

This team makes me want to go on a punching spree inside of a children's hospital.

LMAO Avery with a timeout 20 seconds in Avery chewing out Brook.

Travis Outlaw not giving shit about what Brook Lopez said and scratching his head the whole time probably thinking about eating Fried Chicken after the game..

Brook probably thinks he is doubled because he is good

Why is Travis Outlaw permitted in the NBA?

Our 2nd unit is so much better, we dont need Lopez we aint winning games anyway

Celtics are really good but nets are looking like last year they should alteast compete.

Lopez is a turn over machine the guy suck so bad

Damn Boston is so good I know, obvious. But you dont really see it when they’re playing good teams. it’s when they play against a squad like us that you realize how stacked they are.

I don't think Brook belongs in the NBA. Rajon Rondo outrebounded him.

I can't believe we finished that quarter only down five.

On the bright side If they outscore us by 5 in each quarter, it’s only a 20 point loss!

How did some of these guys make their college team?

Where going to win this one

Where? We are at Boston.

I think wafer would be a good fit on the nets

he's a good fit on teams with stars
On this team he’d be asked to do way more than he’s capable of.

I still ask myself why the hell does Perkins maintain that ''I'm constipated'' look when playing ball..

Harangody is destroying Lopez and his shot is freakin weird

Lopez you trying to choke perk?

Hahaha Lopez actually held his throat, perkisn would kill him

Since when did perk have emotions

Perkins His face looks like he’s always on the verge of getting into a fight.

Tied at the half. Plenty of time to lose

I want us to beat Boston real bad. If there's one team I don't like, it's the Celtics.

I think most of the fans know Boston has another gear And we don’t. This is as good as we’re gonna play.

Celtics are simply joking around with us.

Boston looks bored They came out destroying us and then just kind of…eased up. They have four guys headed to LA this weekend, I’m sure this game is the last thing on their mind. Hopefully they stay asleep long enough for us to steal this.

The Nets are gonna end up winning this game.They can't beat the Knicks without Amar'e but they'll win this one.

Something is fishy I feel like we’re on punked

Boston not even calling timeouts Doc’s like “we got this…”

Not even NETS fans believe they can win SMH

Maybe its cause I just smoked but quinton ross is looking good on D.

Enjoy this lead while you can Nets fans It won’t be here for long : (

NICE ELBOW HUMP!! Finally, somebody putting garnett in his place. he’s so annoying.

Notice how Garnett doesn't go too far too mess with Hump because he's his own size.

Shut up Garnett Humphries would whoop your ***!!

I hate how awkward Lopez looks sometimes He’s just so bumbly and fumbly. There’s no other way to describe it.

Wow the Boston announcers don't even TRY to be somewhat neutral

Lawrence Frank is the most visible assistant coach ever

Outlol what are you doing on the floor

Now nobody will take outlaw

He hit his head, thats not even funny dude

Anyone wishing for any Nets players to be injured deserved to be banned.

What kind of person are you? 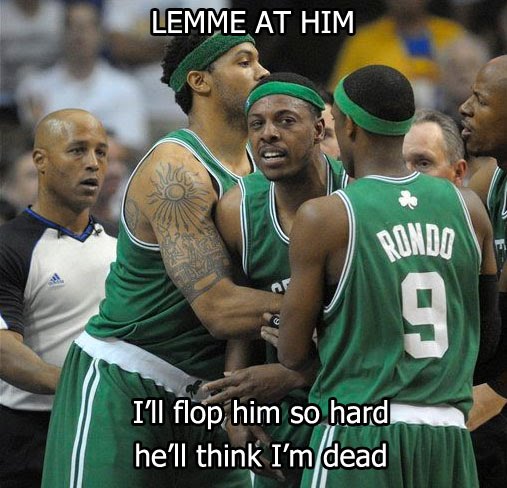 Why are we getting so many offensive boards? And why cant we do anything with those boards?

This is where talent overtakes us Celtics have players who can finish shots and move the ball around. We just have nobody to go to.

Way to go refs Missing it as always

Game over guys Back to reality, we stink!

Lopez is back to soft pillow mode Games over. Lopez is afraid to go within 10 feet of the rim.

We have a bunch of girls on this team who wont take it to the basket.

Lopez is one of the least clutch players i’ve ever watched. No surprise here.

He was real clutch his rookie year.. Thats what having a vince carter does for you. That’s why we need melo.

Rondo has more rebounds than Lopez

Thats because he is in beast mode every game.

Boston's defense is so good and Lopez is so soft

Who they call that??? Hahaaa

I got no clue. Them Celtics be crazy.

We use to push them around......now the role is reversed. Can't believe how many times they punked our bigs and we didn't push back. Davis practically leveled Hump and stood over him, and Hump just got up and walked away. No fight from our big men

Sorry but the reffing was atrocious and a joke tonight... But I expected it would be.

No, the Celtics just started playing lock down D and we dont have a good offense as it is. Celtics were in position to win this game all along, depending on when they woke up. We gave up in the first 3 minutes, but Avery had enough clout to revive us.

Avery should be relieved of his offensive playcalling duties. He is clearly not capable of designing plays that allow his players to get open. I think most fans will agree it is painful to watch the Nets try to run these high school plays that just don’t work.

That FT differential is pretty big

3 good quarters by the Nets tonight... In the 4th, they showed there true colors. It’s tough for a team filled with role players to beat the Celtics, refs…etc.

Who cares there’s a party in the Melo thread. Everyone is invited.

Thank god for Allstar break. No more torture for a week.

We need a player that can create one on one like Pierce did when the Celtics needed a score. Bottomline.

Maybe we can trade Lopez for Perkins.  We need some toughness like that instead of the pillow soft center we have.  No other center in the league gets the ball in the post and dribbles away from the basket.  NOT ONE

I also would have liked Hump or Lopez or one of the bigs to shove the hell out of Garnett or Perkins or Davis. They got away with one too many dirty plays for my liking.

Brook tried to get a little physical with Perk that one time…and then probably realized he was in over his head.

Can't start or finish,but in between we are awesome.