Bitching Your Way Out of Town 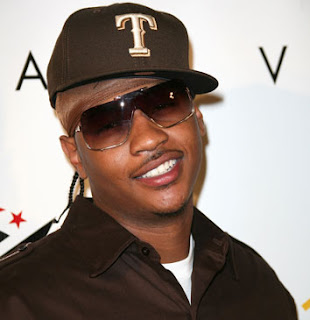 Considering the whirlwind that took place with 1/3rd of the Celtics roster being traded within an hour on Thursday, it's understandable if you hadn't given a second thought to Carmelo Anthony bitching his way out of Denver.  Instead of all the clamoring as to how this benefits the NBA when NY is relevant for basketball, I decided to take a different approach.  Instead let's step back for a moment and look at it from Denver's perspective.

You have a franchise player that you've built around for the past 7.5 seasons.  He was the center of your team and you tried to find pieces to fit around him.  You first tried to get it to work with Andre Miller, a heady, consummate pro.  Everyone always speaks highly of Miller and enjoys playing with him.  That didn't really work out, so you decided to move Miller for Allen Iverson.  The splashy trade with the mindset of either Iverson or Carmelo could be 1A-1B.  That worked to an extent but they never made that next step.  So you decide to move Iverson (who is without question a better all-time player than Carmelo) for Chauncey Billups.  The Denver organization stands behind him again.  By 2009 they were 2 games (or 1 ridiculous trade from the Buffoon) away from making it to their first NBA Finals where they would've had a pretty good chance of winning it all.  Bringing more pride and glory to the city of Denver than they've seen since the Broncos won the Superbowl.

Last year's pathetic playoff performance was due primarily, but not exclusively, to Adrian Dantley.  However one can't forget Carmelo's moronic foul at the end of Game 2 vs the Jazz with 31 seconds to go which essentially cost Denver homecourt advantage and ultimately, the series (talk about a dumb basketball IQ, not knowing time and score in that instance- that moment epitomized it).  And less we forget your courageous coach's bout with cancer.  George Karl's a really classy guy, and a great leader.  He fought off cancer not once, but twice,to be back on the sideline, trying to motivate Carmelo to stay focused, win games, and take it to that next level.

But it never happened.  Because Carmelo was a malcontent.

To boot, the Nuggets as of the trade were 33-25; the Knicks, 28-26.  So you have a team that bends over backwards to cater to your every need, tries to facilitate trades and signings that complement your game and you want to go to a worse situation?  You have a legit bigman in Nene, solid players in JR Smith and Chauncey Billups and a much better coach in Karl than Mike D'Antoni will ever be.  With Miami in the East, realistically, you'd probably have a better chance at coming out of the West within the next few years, with the right acquisitions.  And imagine a showdown between Miami and Denver for the NBA Finals.  The top 4 players from that famous 2003 draft all in the series.  If Denver were to somehow win it, Carmelo would be revered as the guy that stayed where he was, unlike LeBron and Bosh, and lead his team to a title.  You know, sort of the way Paul Pierce handled himself (enduring a much worse situation with the Celtics by 2006 and 2007 than Anthony ever had to deal with in Denver). 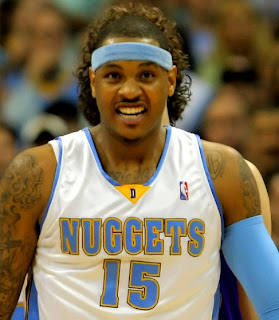 Since Carmelo was in the same draft class as LeBron and Wade, like it or not, will always be compared to them.  To this point, his career has fallen short of what LeBron and Wade have accomplished.  While LeBron was winning back-to-back MVPs carrying the likes of John Legend and Sideshow Bob to 60+ win seasons, Carmelo wasn't playing defense.  While Wade was slicing his way to a title in 2006 and being named Finals MVP, Carmelo wasn't playing defense.  Carmelo just doesn't focus on playing defense.  And that's what separates him from his peers.   And if you don't believe me on that, just ask Coach Karl.

This is no knock on Carmelo Anthony the person (if you want to get into that subject, you should start here).  This is a knock on Carmelo Anthony the basketball player.  Instead of being the most respected Nugget since Alex English, Carmelo should be viewed as a malcontent.  A crybaby who had to get his way.  You thought the LeBron saga was bad?  Hell it only lasted until about July 10th for him to announce his decision.  We've been dealing with this Anthony crap since the beginning of the season- that's 5 months for you counting at home.  For awhile I was surprised hoopshype.com didn't change it's name to carmeloanthony.com; his picture was at the top of the page in the rumors section every day.  He refused to accept the trade to NJ, threatening not to sign an extension and this preposterous "melodrama" just kept snowballing.

So he bitched his way out of Denver.  It was an easy cop-out, something a lot of players could do and potentially change their place in NBA history (see Richmond, Mitch for this; I'm convinced if he had played for a better team instead of quietly going about lighting up opponents he'd be in the Hall of Fame today- he was a better player than Reggie Miller).  Here's to let you know that I look forward to you not winning a title in NY because you won't win one.  As long as LeBron James and Miami stand in your way, your dream of winning a title will be for naught.  I hope Denver fans boo the hell out of you when you return too.  Because for every guy that sucked it up and stayed with his team through thick and thin, there will be others like you who whine and complain when they have it all.  That's right Carmelo: you had it all in Denver.  The support of the management, the coaches, everyone and anyone willing to add players to your skill-set to make the Nuggets better.  But you bailed on them.

Yep you got your wish Carmelo- you got traded from Denver, the organization that put their heart and soul into building a title contender around you.  You pocketed more than $58 million from Denver during your career.  All to turn your back on the Nuggets for the supposedly greener pastures of New York.  You'll soon realize the grass isn't always greener on the other side.