Most of my articles come from an idea in my head that struggles/demands to get out. Usually that process goes pretty quickly—projectile vomiting and flushing a toilet come to mind as analogies and while neither calls up a pleasant picture, they are probably more apropos than I would like to admit. Occasionally, however, there is a topic that gestates. Running around and around in my head it keeps resurfacing as the Celtics’ experiences and my perception thereof keep bringing it to the forefront. In most cases the delay, and the recurrence of it boiling to the top, bespeak an ambivalence born of green-tinted desires and the hard cold splash of reality testing. Such is the case of Vakeaton Quamar Wafer.

Watching him play I find myself sadly intoning “Von, Von, Von” reminiscent of Ernest P. Worrell’s imploring the obviously disappointing and reluctant sidekick, Vern. "KnowhutImean?" Events have conspired to set up Wafer’s tenure with the Celtics to potentially become one of the most poignant success stories. A team in dire need of new young talent, made even more pressing by a string of injuries, intersecting with a player who has shown sparks of good (if not great) play who has fallen upon hard times brought on by his own character flaws, and in desperate need of redemption. Problem is, every time Von has taken a step forward, he has quickly slid back into his old (and increasingly tiresome) habits. 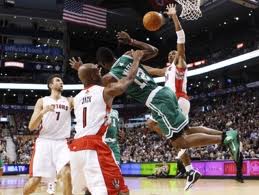 Often when I get one of these percolating notions, as I find myself revisiting the topic I occasionally jot down one or two ideas that just refuse to go away. My notes on Von (There Should Be an I in Team) Wafer include:
Usage rate
Assists
Defensive effort
Pout/disinterest
Ubuntu-NOT
One Delonte away from afterthought

Most of those items were penciled in six weeks ago and actually date back to the 2nd or 3rd preseason game. I keep hoping the Celtics’ culture will overcome the athlete ego but, alas, a most difficult case is proving to be this Von Wafer (strangely I find it awkward to use either his first or last name alone, more natural is a compound VonWafer--no more comfortable to separate than vanGough or Rumplestilskin).

To flesh out the notes a bit, on several occasions Wafer has come in for a five minute stint and either forced up a shot or turned the ball over on almost every offensive trip down the court. That is a usage rate of nearly 100% and it comes without any other teammate ever touching the ball. Now usually this is when he is playing with mostly scrubs during garbage time but it is still the antithesis of the Celtics Way. More recently playing with front-line players he has had some nice assists but for a while I thought he might ring up an assist-to-turnover (or assist-to-shot for that matter) ratio of zero for the season. This attitude is in stark contrast to a team philosophy of unselfish sharing that has been a major advantage over most of the league. For the several appearances before, and the ones immediately after, his defensive outing in November that garnered approval from coach and teammates alike, Von exhibited indifferent defensive attention and effort. Obviously he could “do it right” but just as obviously he mostly (usually, too often) chose not to do so. If there can be a worst, then worse yet he played without any interest in being part of the group, often dispiritedly turning away from the action when he did not get the pass, uninterested in the team huddle during timeouts, ignoring the coaches discussions, and walking away from fallen teammates. This is the converse to Ubuntu, the Ubuntu-NOT. I take an enormous interest in my game/shots/ball-possession, the rest of you—not so much. Before Delonte returned from his suspension, during his brief period of play, and since his injury, I frequently thought, “Von, this is your golden opportunity and if you don’t shape up you will be a fading footnote as soon as Delonte settles in.

Now in fairness, Wafer has shown more consistent defensive effort (although subject to the brain farts of “Hey so that’s where my man went”), the occasional nice assist, some ability to attack the basket, and even an occasional offensive rebound. Surprisingly what has deserted him is his long-range shot which was supposed to be his one strength. The team need is still pressing and the Green would greatly benefit from a focused, active, and dedicated guard who can hit the outside shot. I dare say Von would benefit from showing Doc (and the league) he can be productive and consistent. But the sand is running out of the hourglass and Wafer is in danger of blowing his limited-time opportunity. For all concerned, I hope he finds himself and that self is within the Celtics—there is an “m” and an “e” in t-e-a-m, it’s just not me first.