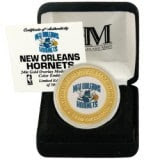 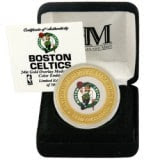 New Orleans Hornets (18-14) at Boston Celtics (24-6)
Friday, December 31
3:00 PM ET
Regular Season Game #31 – Road Game #15
TV: CSN-NE,  CST, NBA-LP 751
Radio:  WEEI,  KMEZ
TD Garden
Referees:   Bill Spooner,  Eric Lewis,  Haywoode Workman
This is the first meeting between these two teams this season.  Doc has said that Rondo might be back for this one but it will probably be a game time decision.   I'm being optimistic by putting him in the starting lineup.

Both starting power forwards suffered injuries in their last games.  West rolled an ankle and KG injured his calf.  West is listed in their starting lineup and may be a game time decision.  KG is definitely out for this one and Doc has said that he will probably start Big Baby in his place.  The Ticket Stub has done well in the past when starting in place of KG and hopefully he can fill in the void again until KG is ready to return.

The Celtics have to deal with yet another injury.   It was hoped that Rondo would be ready to play in this one, but it will be a game time decision.  Their depth will be tested as they struggle to get players healthy for the stretch run.

Whether Rondo or Nate starts, the PG matchup will be key.  Chris Paul is the focal point of the New Orleans offense.  Boston has struggled offensively with Rondo out.   Whoever is at the point will need to defend Paul to keep him from taking over the game and they must also be more efficient with their offense.

Paul Pierce has been taking on more and more of the burden with each additional injury.  He has tried to increase his rebounding and has been distributing the ball and now he will need to increase his defensive intensity with KG out.  Ariza is a good defender and will be a tough matchup for Pierce.   If Ariza makes things tough for Pierce, others must step up.

Honorable Mention
Glen Davis vs David West
Big Baby has been very effective in the starting lineup in the past and he has been playing very well this season so far.  But KG leaves some very big shoes to fill, especially on defense and especially without Perk to anchor the defense with KG out.  Big Baby will need to raise his game even further to fill the void left by KG's injury.  West is their leading scorer and the Celtics will need their team defense to help Big Baby slow him down.

Keys to the Game
Take Care of the Ball -  The Celtics turned the ball over 21 times vs the Pistons and 17 of those 21 turnovers were by the starters.   Some of this can be attributed to the absence of Rondo and Ray and Paul having to handle the ball more.  But they must take better care of the ball and not force passes and not make sloppy passes.

Rebound -    It takes effort to rebound and the Celtics must put forth that effort if they want to win this game.  They can't allow the Hornets to get second chance baskets.  They allowed the Pistons to grab 1 more rebound than them in the last game.  They must be the team that wants it more if they expect to win this game and that effort and desire will show itself on the boards.

Focus and Effort - Especially with all the inuries, each player must come into the game focused and they must put out 100% effort from the opening tip to the final buzzer.  If they lose their focus or play with less than 100% effort, they won't be able to overcome the injuries and beat a Hornets team that is very capable of winning on any given night.

X-Factor
Injuries
A lot will ride on whether Rondo plays in this one and how effective he can be in his first game back if he does play.  The Celtics have been winning through injuries during the past two months, but KG and Rondo both out is a lot to overcome.