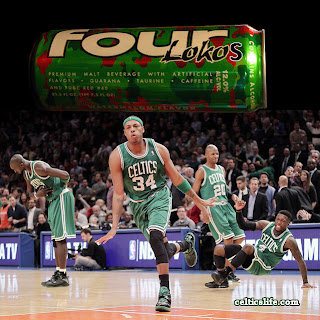 
The Celtics' Paul Pierce and the Spurs' Tony Parker Monday were named the Eastern and Western Conference Players of the Week, respectively, for games played Monday, Dec. 13, through Sunday, Dec. 19.

Pierce recorded a triple-double and two double-doubles on the week, averaging 21.7 points, 8.7 assists, 8.3 rebounds and 2.3 steals, as Boston went 3-0 to extend their winning streak to 13 games. On Dec. 15, Pierce scored 32 points and hit the game-winning shot against New York with 0.4 seconds remaining in the fourth quarter.

Congrats to the Captain! Quite a week for Paul between this honor and the 300K his charity raised.